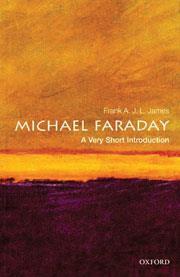 Considered the 'father of electricity', Michael Faraday is one of the best known scientific figures of all time, probably second only to Isaac Newton.

This Very Short Introduction places Faraday in the context of his time. From his humble beginnings in Yorkshire and Westmorland to his work at London's Royal Institution, James explores Faraday's attitude towards religion, key theoretical ideas, his approach to studying the natural world, and his reputation.

James portrays a man with an obsessive character and persistent attention to detail whose science underlies the modern world.

Neither a textbook nor a novel, James offers an engaging non-fictional read into the lifestyle and legacy of Faraday, both as a public man and a scientist. There is also a brief insight into his private life, particularly as a child and youth when his interest in science developed.

Readers are briefly introduced to Faraday's principal discoveries of isolating benzene, some of the alkali metals and the magneto-electrical field theory, as well his interest in pictorial reproduction.

James reveals how the Sandemanian part of the Christian faith guided Faraday through his adult life both as a scientist, at the Royal Institute, and in his dealings with the larger world, and the fact that Faraday took fame in its stride.

Purchase the book from OUP