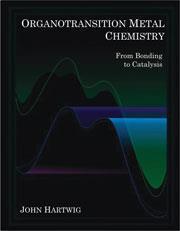 The time is right for a textbook that comprehensively covers aspects of organotransition metal catalysis, a field which has blossomed over the past 20 years. Hartwig is one of the select few to have a reaction named after him, and is ideally placed to write such a book.

This is a large tome, with over 1000 pages and, at over £50, it is aimed at research scientists and university libraries rather than undergraduates. The first 14 chapters concentrate on the fundamentals of organometallic chemistry and reactivity followed by chapters on various reaction types - catalytic carbonylation, cross-coupling reactions etc - many of which are written in collaboration with specialists in the relevant field. This book is nicely laid out, well referenced and up-to-date.

My major criticism is the number of mistakes in the book - it's littered with all the failings I warn undergraduate students against and mark them down for in their laboratory reports. There are planar phosphorus atoms that should be tetrahedral, orbitals with lobes missing, names spelt wrongly (Zeiss's salt, anybody?), unbalanced equations and so on. To be fair the author does say in the foreword that there are bound to be errors in this first edition. But while Hartwig states that any corrections will be listed on the book's website, they are not.

Organotransition metal chemistry - from bonding to catalysis should prove itself to be a useful overview of the field, though I think it's aimed at US graduate courses rather than the UK market. The basic chemistry is covered by a host of more undergraduate-friendly (and cheaper) books, whereas for the research scientist who knows the basics, the first half of the book is largely redundant.