Origin of chirality in the molecules of life 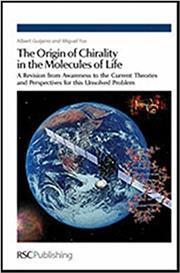 Did handed molecules arise by chance? This book deals with this great unanswered question of science, linked with another, the question of the origin of life on Earth, so I'd be inclined to complement it with reading Wills' and Bada's book, The spark of life; Darwin and the primeval soup.

After an introduction devoted to Louis Pasteur's discovery of enantiomorphous crystals of sodium ammonium tartarate, it is straight into theories of the origin of biomolecular homochirality. The book covers more than just the symmetry reasons, examining the mathematical basis of chirality, going on to look at chiral fields and chiral forces, right down to the level of sub-atomic particles, and the possibility of detecting parity-violating differences between enantiomers.

The authors consider the possibility of experiments to create enantiomeric excesses, such as Ribó's use of a rotary evaporator to trigger aggregation, and the chiral serine clusters detected in mass spectra, along with examples of amplification factors in catalysis. The possibility of circularly polarised light in certain regions of space (including our own solar nebula) leading to enantiosynthesis is also examined. A short chapter surveys the evidence from outside the Earth, such as analyses of the organic content of the Murchison meteorite showing some enantiomeric excesses.

Well-illustrated and thoroughly referenced, the text integrates theories from a wide range of disciplines, though it lacks an author index. This is a comprehensive and powerful book, demanding on the reader and requiring several sittings.