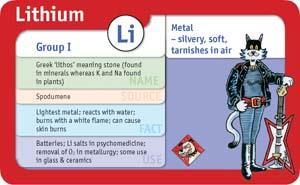 This is a set of colourful playing cards which are based around facts associated with elements of the Periodic Table. Each pack contains 56 cards: two introductory cards, and a card each for 54 elements - five each from Groups 1-8, 12 common transition metals plus uranium and plutonium.

The cards are double sided. One side gives the symbol, origin of name, and source of an element as well as its uses and a related fact. The reverse starts with five basic facts - atomic and mass numbers, density, and melting and boiling points. The facts for each element continue with cost per 100 g, its date of discovery, number of isotopes, electrical conductivity, ionisation energy and relative abundance in the solar system. All facts and statistics are clearly laid out for ease of use, though if one was being pedantic, the density figures would be better quoted in g cm-3 instead of g dm-3.

The cards would make an excellent starter or plenary activity for any key stage. The cards could be used in many ways with imagination, in groups or pairs. However, if you don't have the time to be imaginative there are seven suggested activities supplied with the pack. The most obvious use for these cards is in a game of Top Trumps, which certainly helped my year 8 class become more familiar with the elements. An activity for KS4 pupils could be to arrange the cards in the correct layout corresponding to the Periodic Table.

Priced at £8.99 per pack, the cards unfortunately don't represent great value for money, when compared to your average pack of Top Trumps at £2-£4. As a result buying sufficient sets of these cards so that they could be used effectively with pupils would be a significant investment for quite a limited return.