Scientific fueds: from Galileo to the human genome projectrop protection 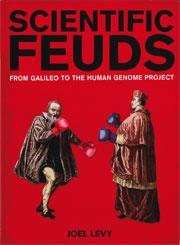 'From epic conflicts to petty quarrels, Scientific Feuds unmasks the true nature of scientific progress, proving that in their quest to extend the boundaries of knowledge, scientists all too often create enemies. When it comes to the human stories behind the ideas, the world of science is rich in drama and emotion.'

It is well known that many fields of human progress feature feuds and controversies, not people happily sharing results and bouncing ideas off each other, and science is no different.

Such feuds have featured previously in books by Hal Hellmann - Great Feuds in Science (1998), Great Feuds in Medicine (2001) and Great Feuds in Mathematics (2006), and in Cathedrals of science: The personalities and rivalries that made modern chemistry by Patrick Coffey, the last example concentrating on feuds surrounding the physical chemist Gilbert Lewis.

Not all controversy is of course bad and although some of the personal feuds described in this book resulted in the demise of one or other party, some rivalries stimulated thinking and even accelerated progress in research.

Scientific feuds is split into sections dealing with earth sciences (for example, Kelvin vs  Lyell and Darwin vs Huxley over the age of the earth), evolution and palaeobiology (for example, Leakey vs Johanson over the identity of hominid remains), biology and medicine (for example, Franklin vs Wilkins during the race to unlock the secrets of DNA structure and Venter vs the Human Genome Project), and finally physics, astronomy and maths (for example, Tesla vs Edison over the war of the currents).

Scientific feuds is obviously intended for a mass market with its large print and colourful (though somewhat dated) design, but it does describe many of the major scientific controversies in history and outlines the cut and thrust of the disputed issues in illuminating detail. Together with good photographs, quotations from original sources, fact boxes and timelines, this book was both enjoyable and informative.