The elements: a visual explanation of every known atom in the universe 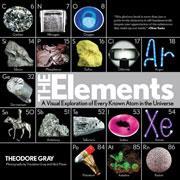 This attractive but weighty coffee-table book starts with an introduction to the structure of the Periodic table, hyped as 'a classic shape... instantly recognizable as the Nike logo... one of civilisation's iconic images', before dealing with each element in atomic number order. Most elements have a double-page spread though elements with atomic number over 100 are confined to two double-page spreads.

The book features stunning photographs taken by the author Theodore Gray and Nick Mann against a black background, so any text is white. Typically, there is a full-page image of the element facing several images of geological samples of ores and uses of the element and its compounds. The authors have made every effort to vary the images of the many grey metals, which are taken from Gray's almost complete set of element samples. The technique of photographing objects against a black background with no people, however, can make relative sizes difficult to gauge.

The text is sometimes conversational in style, even personifying elements as 'neon stays above the fray'. The book uses periods in their chemical meaning but refers to Groups as columns. It is a shame that the meaning of periodic is unexplained and odd that the one paragraph about Mendeleev refers to the discovery of germanium supporting his periodic system rather than gallium, the first such element recognised.

Gray points out that the rare earths are not rare and gives them equal coverage to the more familiar metals. Specific uses are given of these important elements, including powerful neodymium magnets in hi-fi headphones.

There is a wealth of detail about all the elements though I did spot a few errors such as radium's atomic number, the spelling of 'phosphorous', and pyrite(s) is not FeS. Doubtless these trivial errors will be corrected at the second printing it deserves. The book is reasonably priced and I am pleased to add it to my library alongside my review copy of Quadbeck-Seeger's World of the elements, both coffee-table books about the elements but very different in appearance.