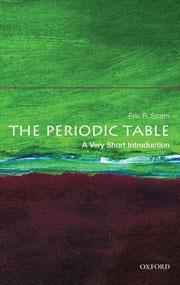 Although entitled A very short introduction, this book of 140 or so pages still manages to pack in a substantial amount of information. Usefully proportioned, so as to fit neatly in my raincoat pocket, I found that during spells waiting to catch a train, I could learn an awful lot from it.

Much of the book is concerned with the history of how the periodic table has developed, including the characters who have contributed to its development. This history is not of much practical use in an undergraduate chemistry course. Even so, it’s probable that unless you’ve studied this area specially, even postgraduates will learn quite a bit from this slim volume.

It’s also quite interesting for a chemist to read not only of the origins of their beloved periodic system, but also to see the scientific (and at times not-so-scientific) process which led to its final formation. It was illuminating to see the various other designs of the table (I learned that over 1000 have been published), ranging from circular to spectral, some looking more like maps of the stars than anything resembling a table.

In fact the thing I enjoyed most about the book was its narrative theme. Scerri makes the intriguing observation that periodicity appears to be an inherent property of the elements.

He tracks the history of the scientific community which struggled with this fact, until it finally understood it with Mendeleev’s table. The story runs from the alchemists to quantum theory via Lavoisier and Prout (among more obscure characters).

So although factual, this book is also entertainingly historical and touches on quite large themes, like the nature of the scientific method. It also asks if there is such a thing as an ‘optimal periodic table’, and whether the periodic nature of matter is really objective.

Purchase this book from Amazon.co.uk