World of the elements: elements of the world 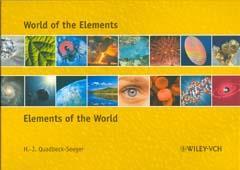 This is an American translation of a German coffee-table book written by a former president of the German Chemical Society to mark the bicentennial of the publishers and, though strangely not mentioned, Mendeleev's death centenary. The book's landscape layout accommodates a long-form Periodic Table across the inside cover. This puts elements in nine categories, with a matching colour coding used elsewhere in the book.

The book's first quarter describes the historical development of the Periodic Table. The main section of the book, over half of the pages, provides pen pictures of individual elements, their identification and isolation, etymology, main chemical and physical properties, and uses in today's world. My knowledge was greatly increased of specific uses of individual f-block elements, for example samarium is used in modern small microphones and earphones for Walkmans and iPods. 'Record' appears for elements with the most/greatest of a property, like ionisation energy, liquid range. a sort of element Olympics.

The final quarter presents colourful charts, tables, maps etc for a wide range of information about elements, eg their abundance, discovery sequence and place, and world production. This final section was fascinating and relaxing reading whereas some of the element profiles, with their clipped style, were more encyclopaedic text.

Aimed at a wider, general readership, there are chemical formulae but no equations. Photographs abound to illustrate uses or discoverers of elements and the overall layout is attractive.

One expects American spellings but I also found that some language, eg sulfur described as the 'smelly shoe element', or words like 'passivate', grated. I noted at least a score of trivial errors, not surprising in such a detailed text, which should be amended in the second edition this book merits.

There are many coloured thumbnail images, though often not captioned, to illustrate a modern view of chemistry and its applications. This book could be casually left on a school or college library table, where it will entice and satisfy students interested in science. Good value at ca 10p per page, this is the sort of book I enjoy as a gift.