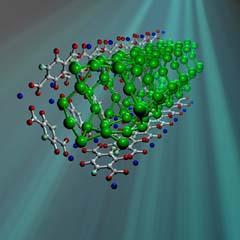 Using renewable energy sources, such as wind, solar, and tidal, to convert biomass into hydrogen fuel, could underpin a future 'hydrogen economy' based on fuel-cell devices that then convert the hydrogen into water and release the pent up energy. However, storing useful volumes of hydrogen for powering fuel-cell vehicles remains a major obstacle. Now, US scientists at the National Institute of Standards and Technology's Center for Neutron Research (NCNR) believe they may be one step closer to understanding how to build a fuel tank for a clean, efficient, hydrogen-powered car.

NCNR's Craig Brown and colleagues at the University of Maryland and the California Institute of Technology have investigated a range of metal-organic frameworks (MOFs), a type of highly porous material developed at the University of California in Los Angeles.1 These materials can adsorb gases when pressure is applied and then release them again when they are heated. Brown believes that MOFs could be engineered to soak up and trap huge volumes of hydrogen gas without the need for high pressures and temperatures required by other materials. Such a material could make refuelling with hydrogen become as easy as pumping petrol is today.

One particular material, MOF-74, based on a carbon skeleton interspersed with zinc atoms exists as a porous, crystalline powder. At the molecular level, MOF-74 resembles a series of tightly packed straws. It is so porous that just one gram of the material has an internal surface area equivalent to two basketball courts.

Using neutron scattering and gas adsorption techniques, the researchers showed that at 77 K (-196°C) MOF-74 can adsorb more hydrogen than any other unpressurised framework structure known. The density of the adsorbed hydrogen is even higher than it would be if the gas were frozen into a solid block. Brown admits that the team does not yet understand what allows hydrogen to pack so tightly, but the zinc centres seem to be key to the process.

Brown explains, 'When we started doing experiments, we realised the metal interaction doesn't just increase the temperature at which hydrogen can be stored, but it also increases the density above that in solid hydrogen. This is the first time this has been encountered without having to use pressure'. Although the liquid-nitrogen temperature of MOF-74 is not exactly temperate, it's easier to reach than the temperature of solid hydrogen (-269°C), and one of the goals of this research is to achieve energy densities great enough to be as economical as petrol at ambient temperature. MOF-74 is a step forward in those terms.

This artice was originally published in The Mole