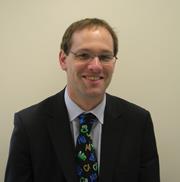 Browning bananas, oscillating reactions and paracetamol are just some of the topics currently up for discussion on the ChemNet forum. Here, students put their fiendish calculations and chemistry conundrums to Dr ChemNet. Although you may be picturing a single chemistry mastermind half-buried beneath a tower of textbooks, the real brains behind the operation are a team of chemistry experts, one of whom is Leonard Winning.

Leonard is no stranger to tricky chemistry questions. As well as being an online chemistry guru he’s a teacher who has seen hundreds of students through their exams over the years. His desire to share his passion for chemistry stems from his days as a student.

After leaving school with four good A-levels Leonard studied for a master’s degree (or MChem) in chemistry at Oxford University. During his final year he worked on a research project in organic chemistry, which he enjoyed so much he chose to stay in the same lab for four more years as a PhD student. It was during this time he discovered a knack for explaining difficult concepts in chemistry.

‘Teaching wasn’t something I’d ever really thought about before, but I got the chance to tutor some younger undergraduate chemists while doing my PhD,’ he explains, ‘and I realised I actually enjoyed teaching more than what I was doing in the lab.’

So, Leonard chose to leave university after finishing his PhD rather than staying on to do postdoctoral research. He ‘took the plunge’ straight into teaching and started working at his old school in Kingston.

Nearly everyone visits their old school at some point, but going to work there is pretty unusual. Luckily, it worked out for Leonard. ‘Most of the science department have changed since I was there,’ he laughs, ‘otherwise it might have felt a bit strange!’

During his first year he completed his teacher training and gained a Postgraduate Certificate in Education (PGCE) from the University of Buckingham. Fast forward a few years and he is now head of the chemistry department, responsible for organising all the teaching in this core subject.

It is a certainly a rewarding career. ‘The best thing about being a teacher is helping people to understand how the world works, and maybe inspiring them to go and find things out for themselves,’ says Leonard. And there’s never a dull moment. ‘It sounds like a cliché, but every day really is completely different,’ he says. ‘As a teacher you meet so many different people – probably more new people than in almost any other job. I’ve also been able to teach other subjects like physics.’

But teaching is not without its challenges, especially in the sciences. A room full of excitable chemists-in-training with Bunsen burners, gas taps, delicate glassware and hazardous reagents can be a recipe for chaos, and good teacher has to take charge of that situation. Being able to explain difficult ideas to people is an absolute must, says Leonard. ‘I think passion for the subject is very important too,’ he adds, ‘if you find something interesting and exciting yourself, you’re more likely to get other people interested in it.’

A school may be a very different place to work than a research laboratory, but since making the leap, Leonard says he’s never looked back.

‘I do sometimes miss the lab – it can be exciting to be working on something completely new,’ he explains, ‘but research can also be very repetitive and involve doing the same things day-in day-out, and I definitely don’t miss that aspect of it. I absolutely think teaching was the job for me.’

2007–2013, Teacher of chemistry, Kingston Grammar School, including PGCE (University of Buckingham) during 2007–8