Onion batteries: do they really work or simply end in tears? 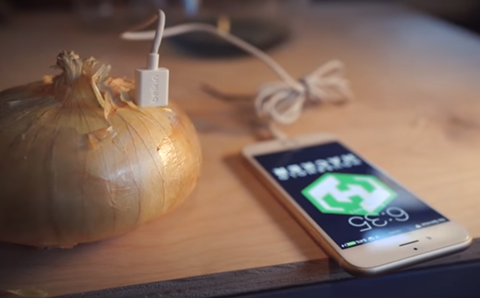 A recent YouTube clip claims that an iPod can be charged-up by using its charging cable, a few 100 ml of a sports energy drink and an onion. The clip has apparently attracted almost five million hits. But is it possible?

The clip shows an onion being drilled in a couple of places and then left to soak for 30 minutes in a 'high energy' sports drink. An iPod charging lead is connected at one end to the iPod and the other end (which usually goes into the AC adapter/charger) is pushed into the onion.

Now two metals placed in an electrolyte will produce a potential difference across them, providing the metals are different. So it's possible that pushing the plug into the soaked onion will produce a voltage if the plug and its pins are of different metals. But the potential difference won't be very much, probably less than 1 V and the current will be small, a few mA or so, depending on the surface area.

An iPod requires several 100s mA charge at a few volts (ca 5 V). So unless something unusual is happening within the onion layers there won't be enough electricity to charge an iPod. Why might the authors think the onion charger would work?

An iPod is basically a specialised computer with many programs that enable it to function. One program is the 'charge battery and show details on iPod screen'. When the plug is pushed into the onion, the electrolyte (a good conductor) completes a crude electrical circuit that sends a signal to the iPod. This will either wake it up from its sleep mode or, if it's already on, will trigger this charging program.

I think what you see on the clip is the residual power in the iPod battery running the first steps of the charge program on the iPod screen but probably not actually getting so far as charging the battery at all.

It's easy to get fooled since leaving the onion in place for an hour might well produce a higher reading on the battery level meter when you turn it back on again. But then so will leaving the iPod unused for a while. This is because when you stop draining a battery and give it a rest, it can recover a little so when you start to use it again its voltage will also have improved a bit.

So while you can make electricity using the soaked onion, it won't be enough to charge an iPod. I would be delighted if you can prove me wrong though. One thing is for certain, it's a great way of ruining your iPod charging lead.