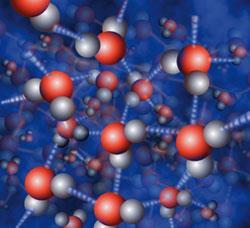 Chemists use a complex combination of jargon and graphics to communicate information, and it should be no surprise that students can find it difficult to adapt to this new ‘language’ of multiple representations. Hilton and Nichols have carried out a study which probed students’ understanding of different representations in relation to the vital topic of chemical bonding.

In their introduction, the authors revisit the suggestion that there are three levels of representation in chemistry; macroscopic, sub-microscopic and symbolic. They propose that students’ misconceptions arise from the misguided use of different forms of representation by past teachers, adding to the mystery of chemistry rather than clarifying it. In particular, symbolic representations, communicating little information about underlying phenomena, can be problematic.

The research involved 49 Year 11 students, and was carried out in two phases. During the initial phase, students were taught about the use of representations in explaining and predicting phenomena relating to structure and bonding. Electronic learning resources, including ACD ChemSketch and Molecular Workbench (both freely available online), were used extensively for hands-on learning. This was followed by a second phase involving two investigations into the properties of biopolymers, where groups of students completed digital posters and lab reports in different orders. This allowed the researchers to examine students’ abilities to use multiple representations in describing the behaviour of biopolymers at the molecular level.

Evidence from pre-test/post-test comparisons and scrutiny of their work showed that students’ understanding of the phenomena underpinning their laboratory observations had been enhanced by the approach. Other interesting outcomes are evident in the comments of students themselves, many of which are included in the text. Students felt that generating and manipulating their own molecular-level models and diagrams was particularly valuable, and that the focus on multiple representations helped them to communicate with each other more effectively.

In the final conclusions, the authors suggest that teachers’ own understanding of why they use particular representations is not always clear, and that a lack of focus can lead to misconceptions, with implications for teacher training and professional development.