John Emsley, University of Cambridge, takes you on a tour of the Periodic Table. In this issue: Cobalt: vitamin B12, blue glass and invisible ink

Curiously, this element got its name by being cursed. When, in the 1500s, silver miners in Saxony tried to smelt what they believed was a silver-bearing ore they were disappointed and cursed the mineral, saying it had been bewitched by goblins. They referred to the ore by the German name for these evil spirits, kobald (it was in fact smaltite, CoAs2) and kobald eventually gave rise to the name of the metal itself.

In 1730, the Swedish chemist Georg Brandt (1694-1768) began to investigate a similar ore found in a copper mine at Vestmanland and showed it was a hitherto unknown metal which he christened cobalt.

Today cobalt comes mainly as a by-product of nickel production, and it is used in alloys for magnets, in ceramics, in catalysts and in paints. Certain types of stainless steel contain it, including that used to make razor blades. One alloy of cobalt, chromium, and tungsten is known as Stellite and is used for heavy duty high temperature cutting tools. Some cobalt alloys are used in artificial body parts such as knee replacements and in dentistry.

Cobalt can be magnetised, like iron, although it is less powerful. However, it has the advantage of maintaining its magnetism to much higher temperatures; iron demagnetises at 770°C whereas cobalt's Curie point is at 1130°C. Alnico, an alloy of mainly of aluminium, nickel and cobalt, is used for permanent magnets that are very powerful; although in small appliances neodymium-based magnets are now mainly used. Cobalt catalysts are used in the chemical industry to convert syngas, a mixture of carbon monoxide and hydrogen, into liquid fuels.

Cobalt is at the heart of vitamin B12 where it is directly bonded to a methyl group; one of the rare examples of a metal-to-carbon bond in nature. Lack of this B12 causes pernicious anaemia - the body cannot produce enough red blood cells to transport all the oxygen that it needs.

Most animal species can make vitamin B12, but not humans. We get ours partly from food - sardines, salmon, liver, and eggs are good sources - and partly from the bacteria in our gut. The daily requirement of vitamin B12 is only around 2 micrograms and the average person can store 1-2 milligrams of B12 in their body - enough to last for more than a year.

In the years after the second world war, when nuclear weapons were tested above ground, cobalt-60 contaminated the planet. Then it was a pollutant to avoid, with a half-life of 5.27 years but now we have a use for it. This isotope, made by bombarding cobalt-59 with neutrons in a nuclear reactor, emits intense gamma-radiation and is used in medical treatment and also to irradiate food and sterilise medical supplies. Irradiating diamonds with cobalt-60 colours them blue.

Among the treasures discovered in the tomb of Pharaoh Tutankhamen, who ruled Egypt from 1361-1352 BC, was a small glass object that was coloured deep blue with cobalt. Synthetic gems dating from 1400 BC have been found at Nippur, the religious centre of the Sumerians, and these too were coloured with cobalt and cobalt glass has also been recovered from a shipwreck of around this time.

Cobalt blue was known in China long before 1400 BC when it was used for pottery glazes, but it was always a rare pigment because cobalt minerals were scarce. 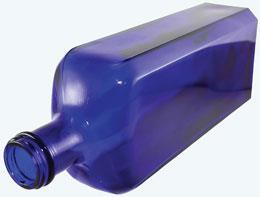 Blue cobalt chloride was also popular as invisible ink and was first used in the 1700s. An aqueous solution of CoCl2 with added glycerol (then known as glycerine) is almost colourless (very pale pink) and was used to write secret messages. Once this ink had dried another innocent letter in ordinary ink was written at right angles across the paper. When the letter reached its destination, the recipient simply heated the paper and the hidden writing appeared. The heating drove off the water and glycerol molecules that surround the cobalt, and chloride ions moved in to take their place, giving dark blue CoCl42- ions.

Cobalt is a lustrous, silvery-blue, hard metal and the head of group 9 of the periodic table. Its common oxidation state is +2 as in CoCl2.