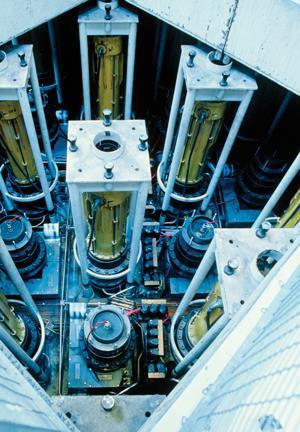 Samarium is an excellent neutron absorber used in nuclear reactors

The first person to have a chemical element named after them, albeit indirectly, was Colonel Vasili Samarsky-Bykhovets. He was a Russian mine official in the Urals from 1845 to 1861 who granted access to mineral samples for scientific research. One of the minerals from his mine, samarskite, was named after him and one of the elements that would later be discovered within it was named samarium.

Samarium’s story begins with the metal cerium, which was discovered in 1803. Cerium ore was suspected to contain other metals and two were identified as lanthanum and didymium in 1839 by Carl Gustav Mosander.

Samarium was first isolated by Paul-Émile Lecoq de Boisbaudran in Paris in 1879. While analysing didymium’s atomic spectrum, Boisbaudran suspected it was composed of more than one element. So he extracted didymium from samarskite, made a solution of didymium nitrate and added ammonium hydroxide. He noticed the precipitate that formed appeared to come down in two stages, so he separated the first precipitate and measured its spectrum. This proved to be the hydroxide of a new element, which he named samarium, after the mineral from which he had obtained it.

Although it was little more than a chemical curiosity for the next hundred years, today samarium has many uses. It is the second most abundant of the rare earth elements and it is almost four times as common as tin. Its ores are mainly mined in China, but there are large deposits in the US, Brazil, India, Australia, Greenland and Tanzania. The most important ore is monazite, which contains up to 3% by weight of samarium.

World production of samarium oxide (Sm2O3) is about 1300 tonnes per year, and the metal itself is produced by heating this with barium or lanthanum to temperatures high enough to drive off the samarium as a vapour. It can also be produced by electrolysis of a molten mixture of samarium chloride (SmCl3) and calcium chloride (CaCl2).

Samarium oxide finds specialised use in ceramics and for making glass that absorbs infrared rays. Calcium chloride crystals doped with samarium are used in lasers and masers (the microwave equivalent of lasers). Maser beams can cut through steel and have been bounced off the surface of the moon.

Tiny amounts of samarium are found in the human body – about 50 mg – but it has no biological role. That hasn’t stopped it being used in medical treatment, however. The isotope samarium-153 is a beta-emitter with a half-life of two days. It was approved for use as a radiopharmaceutical in the US in 1997 and is known as the drug Quadramet, which is used to treat pain in bone cancers.

Another outlet for samarium is in permanent magnets, where its alloy with cobalt produces magnets that are not only 10,000 times more powerful than iron magnets, but have the highest resistance to demagnetisation of any known material. These magnets have allowed the miniaturisation of devices such as motors and headphones. In recent years, samarium–cobalt magnets have been overshadowed by neodymium–iron–boron magnets although they are still used in microwave applications because they retain their magnetism to temperatures above 700°C.

In some countries, the chemical industry converts surplus ethanol to the gas ethene, which is a feedstock for many plastics, and this conversion is aided by samarium catalysts. Other uses for samarium are in carbon-arc electrodes for film studio arc lights, in infrared-sensitive phosphors, and as an excellent neutron absorber for the control rods that regulate the reactor cores in nuclear power plants.