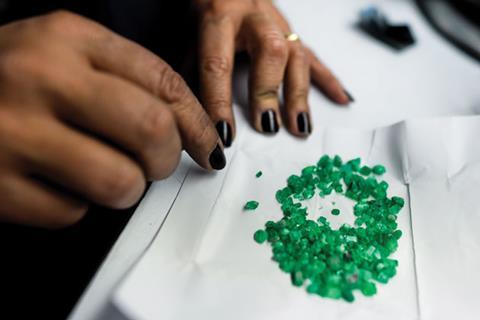 This element is a rarity in the universe. It wasn’t formed during the Big Bang and isn’t even formed in the nuclear furnaces of stars. In fact, beryllium is only made in supernova explosions. But being rare isn’t its only compelling feature – it’s also responsible for incredible treasure, a Nobel prize and glimpses into deep, dark space.

Beryllium’s name comes from the mineral beryl. Beryl, beryllium aluminium silicate (Be3Al2(SiO3)6), makes up a whole range of glittering gemstones, such as aquamarine, heliodor, and the most well-known: emerald.

Emeralds were known to the ancient Egyptians, Romans and Celts. Their beautiful green colour comes from traces of chromium and vanadium, and they are rarer than diamonds. Analysis of the oxygen in the gems enables their source to be identified – the isotope ratio of 18O/16O varies from deposit to deposit. Most come from Columbia, Brazil and Zambia. The Celts, however, got their emeralds mainly from Austria, although some came from as far away as Pakistan.

It was from emeralds that beryllium as an element was first discovered. That the stone might harbour a new element was suspected in the 18th century. Nicholas Louis Vauquelin was first to confirm the presence of beryllium in emerald, but he had been unable to separate it from its oxide. Thirty years later, in 1928, the metal was isolated by Friedrich Wöhler who extracted it from beryllium chloride (BeCl2) by reacting it with potassium.

There was also an important scientific and historic role for beryllium to play. In 1932, James Chadwick made the remarkable discovery that when he bombarded a sample of beryllium with x-rays from radium it emitted a new kind of subatomic particle that had mass but no charge. He called this new particle a neutron, and was awarded the Nobel prize for physics in 1935 for this feat. To this day, the combination of radium and beryllium is still used to generate neutrons for research purposes.

Be is for Dangerous

Beryllium has no known biological role, and indeed it can be harmful to the human body. Brief exposure to a lot of beryllium, or extended exposure to a little, will bring on the incurable lung condition known as berylliosis. It is also listed as a category 1 carcinogen. However, the tiny amount in the average person, of around 0.035 mg, presents no health risk.

In 1990 there was an explosion at a Russian military plant that was producing and processing beryllium for nuclear warheads. The blast spread a cloud of beryllium oxide dust over the nearby town of Ust-Kamenogorsk and 120,000 people were exposed to it. Subsequent monitoring showed that about 9% of them had slightly raised levels of beryllium in their bodies – luckily it wasn’t enough to be truly dangerous.

Due to the perception of beryllium as a health hazard, it never caught on when commercial production of beryllium metal began in 1957. As a result, its uses are limited to military and scientific purposes – for example, it’s used for x-ray tube windows and space telescopes.

Man’s fascination with beryllium isn’t difficult to comprehend: it’s both beautiful and hard to handle.