John Emsley investigates the halogen we love to hate, but can’t live without 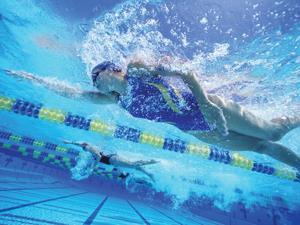 Chlorine is a versatile disinfectant used to keep water clean

Not completely benign, but not entirely sinister. Since being produced by Swedish chemist Carl Wilhelm Scheele in 1774, chlorine has left an ambidextrous mark on the world. Our relationship with it is complicated to say the least.

Chlorine is a halogen and in nature is not found in its elemental form. Its name is derived from the Greek word for green, klôros, and it exists mainly as two stable isotopes, chlorine-35 and chlorine-37. The main source of elemental chlorine comes from the 250 million tonnes of table salt, sodium chloride, the world produces each year. By electrolysing the salt, industry provides chlorine for a vast number of products – from bleach to plastics.

One of the most well-known uses of chlorine is in sodium hypochlorite, NaClO, otherwise known as bleach. The bleaching ability of chlorine was first demonstrated in 1786 by James Watt, and it quickly became the standard method of bleaching linen, overtaking the previously used method of sun-bleaching, a process that took several weeks.

Bleach also has bactericidal properties, making it a versatile disinfectant and steriliser. It is considered environmentally safe, due to the high reactivity of chlorine-based bleach; the hypochlorite ion dissipates almost immediately in natural water environments, leaving the concentration negligibly small.

Due to these disinfecting abilities, water chlorination is widely used to disinfect waters and prevent the spread of waterborne diseases such as typhoid, cholera and meningitis. It is usually done by adding chlorine, Cl2, or hypochlorite, OCl-, to water. When dissolved, chlorine releases hypochlorous acid, which can penetrate the surface of a pathogen and destroy its cell membrane – this quickly kills disease-carrying bacteria and microbes, even at low concentrations.

Despite this simple mechanism, it can become problematic. Occasionally carcinogenic disinfection by-products, such as trihalomethanes, can form and these pose a risk to human health. As a result, chlorinated water requires thorough regulation.

Another important use of chlorine is in the plastic PVC, or poly(vinyl chloride). It is the third-most widely used synthetic plastic in the world and a major component in products as varied as street signs and handbags. PVC is made from petroleum and sodium chloride, the polymer structure consisting of a long carbon chain with chlorine atoms bonded to every other carbon. The chain is made by polymerisation of the double bond in chloroethene (or vinyl chloride).

PVC is occasionally burned for disposal, which releases polluting dioxins (polychlorinated dibenzodioxins). These can constitute a serious health hazard due to bioaccumulation. Fortunately, PVC is extensively recycled, with several projects in place to increase and continue worldwide recycling.

Evidently, though chlorine-containing products are often helpful and valuable, they can be controversial. In particular, industrial scale organochlorines have acquired a reputation for adverse side-effects and pollution. This includes harmful everyday products such as the liver-damaging dry-cleaning fluid carbon tetrachloride, the soil contaminating insecticide DDT (dichlorodiphenyltrichloroethane) and the toxic engineering oils PCBs (polychlorinated biphenyls).

Arguably the biggest organochlorine hazard is that of the chlorofluorocarbon gases (CFCs). They were used in fridges and aerosols but were phased out when it was discovered they contribute to the depletion of atmospheric ozone. Ozone protects the planet and all surface-dwelling life against the sun’s UV rays, making CFCs in the atmosphere a serious problem.

Chlorine, it seems, is a bit of a turncoat. Regulation and recycling should be enough to keep its flip-side contained. Given its nature, we must stay on good terms.