In this issue: Goes liquid, glows blue and grabs neutrinos - it's gallium 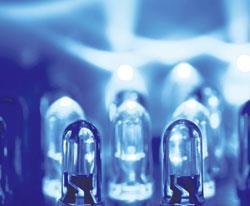 Melts in your hand

A piece of gallium metal will melt in your hand. Its melting point, 29.7646°C, is one of the standard reference points on the International Temperature Scale. However, this is not the only important property of this curious element, some of whose compounds are an essential part of modern living.

Early chemists found gallium only mildly interesting and its scarcity seemed to consign it to a backstage role in chemistry. What pushed it into the limelight was the band gaps of two of its compounds, gallium arsenide (GaAs) and gallium nitride (GaN). GaAs's is small, GaN's is large. (The band gap is the energy required to free an electron from the control of its parent atom so that it can move freely and so carry current.)

Metals have low band gaps, less than 0.1 eV, while insulators have high band gaps of around 4 eV. Semiconductors have band gaps between the two, and that of GaAs is 1.4 eV. This gives it a wide range of uses in integrated circuits, lasers, solar cells and light emitting diodes (LEDs) which glow red (low end of the spectrum).

As a semiconductor, GaAs has advantages compared to semiconductor silicon in that it generates less heat and is therefore more suitable for use in laptop computers and mobile phones. The crystals are grown layer-by-layer from a mixture of volatile trimethylgallium, Ga(CH3)3, and arsine, AsH3. These are heated to reduce them to atoms which are then deposited in a regular array and build up on the surface of a wafer-thin substrate to give crystals of pure GaAs.

Physicists are also intrigued by GaAs because it can form so-called 'quantum dots' on the surface of its crystals. These are able to trap free electrons and confine them to a small area. Quantum dots have applications in fields ranging from computing to biology.

GaN's bad gap is large at 3.4 eV but this enables it to emit light at the high energy (blue/violet) end of the spectrum. With this discovery it became possible to have a full complement of spectral colours so that an LED light could be perceived as emitting white light, and use much less electricity even than halogen lights. White light LEDs are also used to back-light liquid crystal displays in flat screen TVs, monitors and laptops. GaN is stable at much higher temperatures than other semiconductors and unlike silicon, its crystals don't have to be perfect. GaN is made by heating Ga(CH3)3 and ammonia, NH3.

Gallium was discovered in Paris on 25 August 1875 by Paul-Émile Lecoq de Boisbaudran (1838-1912). He saw a new pale violet line, indicating a new element, at 416 nm in the atomic spectrum of the zinc he had extracted from a sample of zinc ore. By November, he had isolated it, purified it by electrolysis and shown that it was a metal like aluminium. In December 1875 he presented a sample to the French Academy of Sciences and called it gallium, derived from Gallia, the Roman name for France.

Gallium minerals are rare. While this element is more abundant than lead, it tends to be widely dispersed. Several ores of other metals contain small amounts of gallium which can be recovered as a by-product of zinc and copper refining. Annual world production is around 100 tonnes, half of which comes from mining and half from recycled scrap.

Gallium has other unusual applications. The isotope gallium-71 has been used to detect neutrinos. When they interact, gallium-71 is converted to germanium-71. Neutrinos have zero charge, virtually zero mass, travel at the speed of light, pass through solid matter and are almost impossible to detect. They are emitted by the sun. Gallium-71, which comprises 40% of the element, can be separated and converted to GaCl3. A tank containing 100 tonnes of this in solution is located in Italy where the sun's neutrinos are revealed by the formation of radioactive germanium-71 (half life 11.3 days), but only a few atoms are present at any one time.