In this issue: the inert element with extreme behaviour

The discovery of helium's existence preceded its discovery as an element on Earth. In 1868 Pierre J. C. Janssen travelled to India to study a total eclipse and he observed a new line in the corona spectrum, which meant an unknown element was present on the sun. (He named it helium thinking it would be a metal.) The same year two Britons, astronomer Norman Lockyer and chemist Edward Frankland, confirmed Janssen's observation when they viewed the sun's spectrum through London smog. The belief was that this new element, clearly abundant on the sun, would not be found on Earth.

In 1888 the US geologist, William Hillebrand dissolved the mineral uraninite (UO2) in acid and observed that bubbles of gas escaped which he could not identify. When Per Teodor Cleve and Nils Abraham Langer at Uppsala, Sweden, made the same observation in 1895 they were able to collect enough of the gas to identify it as the element helium, and to measure its atomic weight accurately. That same year Sir William Ramsay and Morris Travers at University College, London, also collected a sample of the new gas which they too identified as helium. 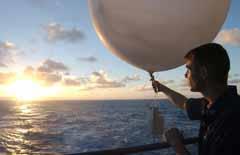 We now know that helium was one of the elements produced during the Big Bang, along with hydrogen and lithium. Stars like the sun continue to produce it by the fusion of hydrogen nuclei, releasing massive amounts of energy. Helium is also being formed within the Earth's crust as uranium and thorium atoms undergo radioactive decay and emit α-particles, which are helium nuclei. This is the source of the 175 billion litres of this gas which the world uses each year.

In 1925 the US Government voted to set up a strategic National Helium Reserve (NHR) at Amarillo in Texas, thinking that it would be needed for a future war which involved airships. That never happened, but in the 1960s helium was needed for the Apollo space programme, and by 1995 the NHR had accumulated 800 billion litres of the gas - and debts of $1.4 billion. The scheme ended in 1996 and most of the gas is now being sold to pay off the debt.

The commercial source of helium is natural gas, mainly produced in the US, which contains up to 7 per cent helium. Although helium is part of the atmosphere, it is not economical to extract it from liquid air.

A quarter of the helium produced is used as a coolant for super-conducting magnets in MRI instruments. Another major use is as an inert atmosphere for welding air-sensitive metals. The production of optical fibres is also done under an atmosphere of helium which suffuses the molten glass and then promotes rapid cooling as it escapes from the extruded fibres.

Helium is used to detect minute leaks in equipment, and small amounts are used for rocket launches - the valves that release the hydrogen and oxygen for the rockets are controlled by compressed helium. Weather balloons and indeed a few airships rely on its lifting power - a cubic metre of the gas can lift 1 kg.

New uses for helium continue to be found. The first helium ion microscope was installed in 2007 at the US National Institute of Standards & Technology. This microscope gives better resolution than a scanning electron microscope, which is currently used to examine semiconductor surfaces. Helium ions have shorter wavelengths than electrons so can be focused into a narrower beam and the particles interact more strongly with materials, thus producing clearer images.

When the temperature of helium falls below 4 K (-269oC), it condenses to form a colourless liquid, but when its temperature drops below 2 K the liquid exhibits bizarre properties and is known as helium(II). Not only does helium (II) expand on cooling, it is a million times more heat conducting than normal liquid helium and its viscosity is zero, so it flows easily. It will escape from any container that is not totally sealed.

Helium can only be solidified at near absolute zero (-273oC) by applying a pressure of about 26 atmospheres. Solid helium also has superfluid properties, so it too becomes a frictionless material. It moves by the action of helium atoms filling holes in the lattice of the solid left by other helium atoms which have moved, and so it creeps effortlessly along. 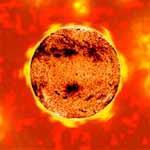