John Emsley, University of Cambridge, takes you on a tour of the periodic table. In this issue: long neglected, indium is essential for solar cells and flat-screen TVs

For over 100 years following its discovery, indium lay in obscurity perceived as uninteresting and of little use. Today, however, this metal is vital to the world economy in the form of indium tin oxide (ITO), which is used in the growing flat- screen TV and solar panel markets. ITO has three properties that make it invaluable for these applications: it adheres strongly to glass; it is transparent; and it conducts electricity. Light can pass through it both when it acts as an electrode in a solar panel to generate electricity, and in the opposite direction when it is used to create electronic images in a flat-panel display.

Indium's name comes from the Latin indicum, meaning violet or indigo, the brightest line in its atomic spectrum. The element was discovered in 1863 by Ferdinand Reich (1799-1882) and Hieronymous Richter (1824-98) at the Freiberg School of Mines in Germany. Reich was investigating a sample of the mineral zinc blende (ZnS), which he believed might contain the recently discovered element thallium. He produced a yellow precipitate which he thought was thallium sulfide, but his atomic spectroscope showed a bright line at 451nm wavelength which was not the green line of thallium. Because he was colour-blind he asked his colleague, Richter, to look at the spectrum, who identified it as a brilliant violet colour and hence the element's name. Richter then devoted his time to separating the element and he exhibited a specimen of the shiny new metal at Paris in April 1867.

Although some indium minerals have been discovered, such as indite (FeIn2 S4) in Siberia, no one has yet found an indium mine, not surprising since this is one of the least abundant elements on Earth. The indium which is produced for industry comes mainly from Canada and is a byproduct of smelting zinc, tin, and lead ores, some of which can contain 1 per cent indium. World production of indium is around 1000 tonnes per year, 40 per cent of which is new metal and 60 per cent recycled. Most indium ends up as ITO (70 per cent) and indium semiconductors such as indium arsenide and indium antimonide (15 per cent), with the remainder going mainly into low-melting alloys for fire-sprinkler systems.

Indium will 'glue' itself to glass and when deposited produces a mirror as good as silver and more corrosion resistant. The metal has a low coefficient of friction and was used to coat ball bearings in aircraft engines in World War II, thus avoiding the need for a lubricant. Ball bearings in Formula 1 racing cars are also of this type.

There are two naturally occurring isotopes of indium: indium-113 which accounts for 4 per cent, and indium-115 which accounts for 96 per cent. The more abundant isotope is weakly radioactive as a β-emitter with a half-life of 600 trillion years (6×1014). Indium-115 has a high neutron capturing ability and is used in nuclear reactor moderators or to measure the neutron flux.

First-generation photovoltaic (PV) cells are made of crystalline silicon and account for most of the solar electricity currently generated, but they are not particularly efficient in turning sunlight to electricity. Second-generation cells made from alternative materials such as copper-indium-diselenide, CuInSe2, (CIS) are better.

These metal-based semiconductors are potentially much better PV materials because they can more closely match the energy of the incoming light rays. At the US National Renewable Energy Laboratory in Golden, Colorado, a cell made of CIS has achieved an energy efficiency of almost 20 per cent.

CIS is already being manufactured into thin-film solar panels which can generate a peak power of 40 watts at 16 volts. Meanwhile indium(III) phosphide is also used as a semi-conductor, while indium(III) arsenide is used for infrared detectors, and indium(III) antimonide will even generate electricity when subjected to infrared radiation. The future of indium looks bright. 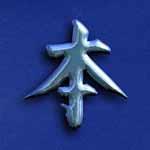