John Emsley, University of Cambridge, takes you on a tour of the Periodic Table.

In this issue: iodine - a little goes a long way

Iodine was first observed by Bernard Courtois, a French chemist engaged in saltpetre (KNO3) manufacture. He used seaweed ash as his source of potassium. One day, in 1811, he added sulfuric acid to saltpetre and was surprised to see purple fumes. When he repeated the reaction in a retort, the fumes condensed to give beautiful black crystals with a metallic lustre. Courtois suspected that this was a new element, and it was soon proved to be so by Joseph Gay-Lussac, who based the element's name on the Greek word iodes, which means violet-like. 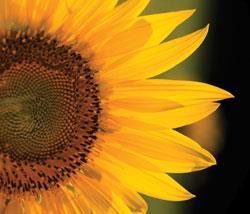 Iodine was extracted from seaweed for over a 100 years. Seaweed, whose ash contains ca 1.5 per cent iodide, accumulates the salt possibly to protect it from uv damage. Iodide acts as an antioxidant and in so doing it converts to iodine, which explains why I2 is detectable in the atmosphere of coastal regions. About 400 000 tonnes of iodine escape from the oceans every year mainly as elemental iodine and as methyl iodide (iodomethane) which is also produced by marine organisms.

Today worldwide industrial production of iodine is about 13,000 tonnes per year. It is extracted from natural brines or from Chilean nitrate deposits which contain sodium iodate (NaIO3). The brines are acidified and chlorine gas is bubbled through, which releases the iodide as iodine.

The human body contains 10-20 mg of iodine, concentrated mainly in the thyroid gland in the form of two hormones: 3,5,3´,5´-tetraiodo-thyronine (aka thyroxine or T4) and 3,3´,5-triiodothyronine (aka T3). These regulate growth and development in the young and control body temperature.

The presence of iodine in the thyroid was discovered in 1895 by a Dr E. Bauman who spilled concentrated nitric acid on a sample of the gland and saw purple fumes rising from it. In 1916 an American biologist, David Marine, of Ohio, showed that the swollen neck associated with goitre was caused by a lack of iodide in the diet. Salt with added KI was introduced in 1930 and goitre became a disease of the past in the US.

We need 70μg of iodide per day, though a pregnant woman needs twice this amount otherwise her developing baby's brain will be impaired. In the last century around 750 million people globally suffered iodine deficiency of whom 10 million were blighted with cretinism as a result of I2 deficiency pre-birth.

At the start of the millennium, the World Health Organisation launched a campaign to have all edible salt iodised at a level of 15 ppm so that a daily intake of 5 g of salt would provide 70μg of iodide. Most countries have now made this a legal requirement, though not in the UK. Here, milk is the major source of dietary iodine, owing to its supplementation in cattle feed. Foods rich in iodine are cod, shrimp, sunflower seeds, and mushrooms.

The main uses of iodine are in pharmaceuticals, animal feeds, dyes, and industrial catalysts. A solution of iodine in alcohol was the traditional way of disinfecting wounds but it was painful. (It is still used to cure hoof fungus in horses.) Iodine is no longer to be found in domestic medicine cabinets, though a new treatment known as Iodozyme has been introduced for long-standing leg ulcers. This involves generating iodine within a two-layer dressing by the oxidation of iodide with hydrogen peroxide.

One of the first commercial uses of iodine was in photography. In 1839 Loius Daguerre produced images on polished silver. He treated this with iodine vapour so forming a surface layer of light-sensitive silver iodide. These plates were then exposed and the stronger the light, the more the silver iodide was converted back to silver metal. The iodine was then washed away leaving a positive image. So-called Daguerreotypes are now highly prized.

Nuclear reactors produce radioactive iodine-131, and this was released in large amounts following the nuclear accident at Chernobyl, Russia, in 1986. It has a half-life of eight days - and decays by β- and γ-emission - and it contaminated the milk and the meat of grazing animals.