John Emsley, University of Cambridge, takes you on a tour of the Periodic Table.

In this issue: Once the destroyer of cities, magnesium is now an energy saver 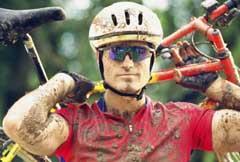 Magnesium helps to keep you on the move!

The summer of 1618 saw England gripped by drought, but as Henry Wicker, a local cowherd, walked across Epsom Common he came across a pool of water from which his thirsty cattle refused to drink. The water tasted bitter and on evaporation yielded a salt which had a remarkable effect: it was a laxative. This became the famous Epsom's salts (magnesium sulfate, MgSO4) and a treatment for constipation for the next 350 years.

In 1755, Joseph Black of Edinburgh was the first person to propose that magnesium was an element: he showed that magnesia (MgO) was not the same as lime (calcium oxide) though both were produced by heating their carbonate ores. By 1792 Anton Rupprecht had produced an impure form of metallic magnesium by heating magnesia with charcoal. Rupprecht named the element austrium after his native Austria. In 1808 Humphry Davy isolated a small sample of the pure metal by the electrolysis of moist MgO, and proposed the name magnium based on the mineral magnesite (MgCO3), which came from Magnesia in Greece. Neither name survived and eventually the element was called magnesium.

Magnesium is essential to all life on Earth; it is at the heart of the chlorophyll molecule, which plants use to convert carbon dioxide into glucose, which is used to make cellulose, starch, and many other molecules which pass along the food chain. Over 90 enzymes in the body require magnesium ions for their catalytic activity. On average people in developed countries ingest ca 300 mg of magnesium from their diet; we need at least 200 mg per day, and the body stores ca 25 g in its skeleton, so there is rarely a deficiency.

Magnesium is the seventh most abundant element in the Earth's crust, and third most abundant if the Earth's mantle is also taken into consideration because this consists largely of magnesium silicates, olivine and pyroxene. The element is also abundant in sea water (1200 ppm), which provided the source of magnesium used in bombs during World War II. The metal itself was produced by the electrolysis of the molten chloride.

Once magnesium starts to burn it is almost impossible to extinguish because it reacts exothermically with oxygen, nitrogen and water. During World War II as many as half a million 2 kg magnesium bombs would be scattered over a city in air raids in an hour, resulting in massive conflagrations and firestorms. However, since bulk magnesium metal is not easily ignited, at the heart of each bomb was a thermite reaction. The thermite reaction between aluminium powder and iron oxide releases more than enough heat to cause the magnesium casing of the bomb to burn fiercely. The metal burns with a bright light and for this reason was also used in photographic flash bulbs.

Many minerals are known which contain magnesium, the main ones being dolomite (calcium magnesium carbonate, CaMg(CO3)2) and magnesite which are mined to the extent of 10 million tonnes per year. Magnesite is heated to convert it to magnesia (MgO), and this has several applications: in fertilisers; in cattle feed supplements; as a bulking agent in plastics; and in heat-resistant bricks for fireplaces and furnaces.

Originally pure magnesium was used for racing bicycle frames because it was stronger and lighter than many other metals. (A steel frame is nearly five times heavier than a magnesium one.) Alloyed with a few per cent aluminium, plus traces of zinc and manganese, magnesium is now used to improve the strength, corrosion resistance and welding qualities of the final products, which are also lighter and thus energy saving. It is found in car and aircraft seats, lightweight luggage, lawn mowers, power tools, disc drives and cameras. Moreover, because it is an electropositive metal, magnesium can be used as a 'sacrificial' electrode to protect iron and steel structures from rusting when they are exposed to water. At the end of its useful life, the magnesium in all these products can be recycled at very little cost.