John Emsley, University of Cambridge, takes you on a tour of the Periodic Table. In this issue: potassium, needed by nerves, plants, and spaceships

Potassium is an essential element for almost all living things and we have around 120 g in our body, found mainly in red blood cells, muscles, and the brain.

One of its natural isotopes is potassium-40. This is a β-emitter, converting the nucleus to argon-40 explaining why there is 1% of this gas in the Earth's atmosphere.

Potassium in our bodies

Potassium ions have many metabolic functions, the more important of which are regulating intracellular fluids, solublising proteins, operating nerve impulses, and contracting muscles. The movement of sodium and potassium across nerve cell membranes allows the transmission of nerve impulses. This lateral motion of charge passes like a wave along the direction of the fibre, as if it were an electric current.

The toxin of the black mamba snake kills its victim by blocking the potassium channels. Murders and executions have been committed by injecting a concentrated solution of potassium chloride into the blood stream to create an osmotic pressure which prevents the movement of potassium across the cell membrane. All body functions are affected, but none more dramatically than the heart muscle, which stops beating.

Potassium is needed in the diet much more than sodium. We require a regular intake because we have no mechanism for storing this element. Foods rich in potassium include raisins and almonds, which have 860 mg per 100 g, currants (750), peanuts (680), and bananas (350). There are important potassium-based food additives such as potassium sodium tartrate (KNaC4H4O6, aka E337) which is a component of baking powder and potassium hydrogen sulfite (KHSO3, aka E228) which is added to wines to prevent the growth of rogue yeasts. 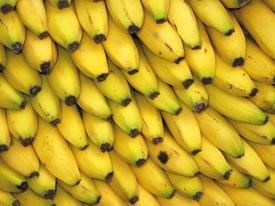 Potassium salts in the form of potassium nitrate (aka saltpetre, KNO3), potassium carbonate (aka potash, K2CO3), and potassium aluminium sulfate (aka alum, KAl(SO4)2) have been known for centuries. In the 1600s it was known that potash was a way of improving soil. Today potassium chloride is widely used as a fertilizer and called by its traditional name of MoP, or muriate of potash.

The past and the present

On 6 October 1807, Humphry Davy (1778-1829) placed some moist potash on a platinum disc connected to the negative pole of his battery. He put a platinum wire, connected to the positive pole, in contact with the potash and soon observed the formation of metallic globules on the platinum disc. This was the first time a metal had been isolated using electrolysis. He named the new metal potassium, and noted that when dropped in water it formed globules which skimmed about on the surface, burning with a lavender-coloured flame.

World production of potassium ores like sylvite (KCl) and carnallite (KMgCl3.6H2O) totals about 35 million tonnes. The UK extracts about 400 000 tonnes of KCl a year from a mine at Boulby in Yorkshire. Most ends up as fertilizer, but some is used to make potassium hydroxide (KOH), by the electrolysis of KCl solution. This is used to make liquid soaps and detergents, or is converted to potassium carbonate (K2CO3) for glass manufacture. A little ends up in pharmaceuticals, medical drips, and saline injections.

Of potassium metal itself, about 200 tonnes per year are produced by passing sodium vapour up a column at 870°C down which molten potassium chloride flows. They react and release potassium vapour which is condensed at the top. Potassium metal is produced to manufacture potassium superoxide (KO2) which is formed when it burns in oxygen gas. This is kept in mines, submarines and space vehicles to regenerate the oxygen in the air when it has become depleted. This oxide reacts with carbon dioxide to form potassium carbonate (K2CO3) and in so doing it releases oxygen gas.

Atomic number 19; atomic mass 39.0983; melting point 64°C (an alloy with caesium and sodium remains liquid down to -78°C), boiling point 774°C, density: 0.86 g cm-3. Potassium is a soft, silvery, highly reactive alkali metal. Its preferred state is the K+ ion. The metal itself dissolves in liquid ammonia to form a blue solution which is a powerful reducing agent.