John Emsley, University of Cambridge, takes you on a tour of the Periodic Table: In this issue: scandium, the shadowy metal that shines like the sun

That scandium is more abundant in the heavens than it is on Earth was realised in 1908 when William Crookes and Gustav Eberhard examined the visible spectra of the sun and certain stars. They identified strong bands arising from this element, which is widely dispersed. 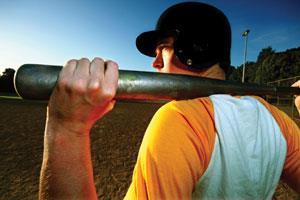 Scandium - at first base

There is no known biological role for scandium, but this might not always have been so because ash residues from coal contain up to 0.1 per cent of this element, suggesting that some environmental enrichment may have occurred in plants 300-350 million years ago (Carboniferous period).

Scandium precipitates from water as the insoluble hydroxide, Sc(OH)3, even at pH 7. Thus, there have been no geological processes to concentrate this element and its presence has been detected in more than 800 minerals. Pure scandium specimens are rare and highly sought after by collectors. Crystals of the greenish-black thortveitite, Sc2Si2O7, are particularly expensive. Traces of scandium are thought to be responsible for the blue colour of the aquamarine variety of the gemstone beryl, otherwise compounds of this element are colourless.

When Dmitri Mendeleev devised his Periodic Table of the elements in 1869 he noticed that there was a larger than expected gap in atomic weights between calcium (40) and titanium (48), and he predicted that there should be another element of intermediate atomic weight which he referred to as eka-boron. This, yet to be discovered, element would fill a slot in Group III of his Table, and he predicted that its oxide would therefore be X2O3.

Ten years later, in 1879, scandium was discovered by Lars Frederik Nilson at the University of Uppsala, Sweden. He extracted it from the mineral euxenite, which contains eight other metals - Ca, Ce, Nb, Ta, Th, Ti, U and Y - and studied its chemistry. Nilson showed that the atomic weight of scandium was 44, and its oxide was Sc2O3, of which he eventually made 2 g. It was his colleague at the university, Professor Per Theodor Cleve, who pointed out that this was Mendeleev's eka-boron. Nilson never saw a sample of the metal itself - this was only obtained in 1937 by the electrolysis of molten scandium chloride.

Scandium for commercial uses is extracted from uranium mill tailings and comes mainly from China and Russia. World production of the oxide amounts to only around two tonnes per year. The metal itself is produced by heating scandium fluoride (ScF3) with calcium metal and it costs around $70 per gram.

There are a few, rather specialised, uses for scandium such as in neutron filters for nuclear reactors. The artificially produced radioactive isotope, scandium-46, has a half-life of 83.8 days and emits high-energy β-radiation (electrons). It is used in oil refineries to monitor the movement of various fractions as the oil is refined, and also to detect leaks in underground pipes carrying liquids.

Adding 0.5 per cent scandium to aluminium increases its strength dramatically. The added scandium raises the melting point of the aluminium by more than 800oC and the alloy can be welded, unlike aluminium. In the US this alloy is used to make sports goods such as baseball bats and lacrosse sticks, and lightweight bicycle frames. In 1971 Soviet Russia used this alloy in the construction of their advanced MiG-29 jet fighters.

Scandium oxide is used as a specialised optical coating for detectors because it is transparent to uv light down to 225nm. When scandium iodide (ScI3) is added to mercury vapour lights it turns their intense but harsh light into something more akin to natural sunlight and consequently such lights are used in filming and for floodlighting outdoor sports arenas.

Scandium remains a mysterious element in one respect: it forms a hydride of formula ScH2, not ScH3 as might be expected. This material is not only odd from the point of view of the valency of the element, but it is a good conductor of electricity for reasons that have yet to be deduced.

Atom number: 21; atomic weight: 44.9559; melting point: 1541°C; boiling point: 2831°C; density: 3.0 kg l-1 (3.0 g cm-3). Scandium is a soft, silvery-white metal which heads Group III of the Periodic Table. It tarnishes in air and burns easily once it has been ignited. Scandium powder reacts with water to form hydrogen gas, and it dissolves in most acids.