In this issue: silver - the noble metal that's now down at heel

Silver is unique among elements in giving its name to a country - Argentina, so named by the Spaniards because it was a rich source of the metal. The chemical symbol Ag, derives from the Latin word for silver, argentum, from the Indo-European root, arg, meaning 'white' or 'shining'.

World production of silver is around 17 000 tonnes per year of which only about a quarter comes from silver mines in Mexico and Bolivia, which are a source of the main silver ore, acanthite (Ag2S). Most silver is obtained as a byproduct in the refining of other metals such as copper. In addition around 10 000 tonnes of silver is reclaimed every year.

Silver has the highest electrical conductivity, the highest heat conductivity, and the highest reflectivity of any metal. These features are exploited commercially in electrical and electronic devices, grinding wheels, and mirrors. Silver solder, for example, is used to stick industrial cutting diamonds to grinding wheels, with the added advantage of dissipating the heat generated effectively. As a precious metal, silver provides the attractive shine for trophies, jewellery, and high-value tableware.

However, silver is a soft metal and reactive, and as such it wears away and tarnishes. It is so soft it can be beaten to an almost transparent film, and one gram of the metal can be drawn into a wire more than a mile long. Until the last century, silver was an essential coinage metal but has since been replaced by a harder-wearing copper-nickel alloy. 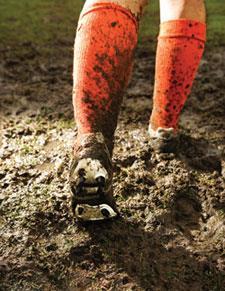 Every sock should have a silver lining

Silver compounds have many uses. Early photography was based on the light sensitivity of silver bromide or silver iodide, exposure of which causes some of the silver ions to revert to the metal as tiny particles. The film was developed with a reducing agent, leading to more silver being deposited on these particles. When the image had the desired intensity the unaffected silver bromide or iodide was washed away with thiosulfate solution, leaving the (negative) image from which positive prints could be made.

Medical pharmacopoeias of the 19th century reveal the use of silver compounds as antibacterials and antivirals. For example, in 1884 ,the German obstetrician, Dr F. Crede used eye-drop solutions of silver nitrate to kill the virus that caused the blindness which afflicted some babies shortly after birth. Silver nitrate solution was also used topically on patients with severe burns to prevent infection. Indeed, until penicillin came along, silver compounds were used against all kinds of diseases and were applied topically, injected, and even given orally.

Recently, scientists have shown that silver-based preparations can kill the antibiotic-resistant bacteria prevalent in hospitals. Moreover, nanosized silver particles kill bacteria, viruses and fungi within minutes of exposure. The silver disrupts the sulfur-sulfur bonds in enzymes, denaturing them.

Paint containing nanoparticles of silver is being used in hospitals to stop the growth of mould. Tests have shown that it kills 99.999 per cent of bacteria which settle on it. When used on outside surfaces such paint reflects 90 per cent of incident sunlight thereby keeping indoor temperatures lower.

Scientists have recently found that incorporating silver nanoparticles into clothing prevents bacteria on the skin from digesting sweat molecules and forming the obnoxious volatile acids which we associate with body odour. Socks containing silver nanoparticles are now available to reduce foot odour and there are boxer shorts and cycling pants on the market which rely on silver to do a similar job.