In this Issue: Strontium - Red Alert

In 1787, an Edinburgh dealer in mineral specimens was offered a new specimen from a lead mine at Strontian, on the west coast of Scotland. He gave the mineral - which was observed to turn the flame of a candle bright red - to a local doctor, Adair Crawford, who concluded that it was a new 'earth' which he named strontia. The mineral was strontianite (SrCO3) and in 1799, another strontium mineral was discovered in Gloucestershire, where the locals were using pale blue celestite - strontium sulfate (SrSO4) - as gravel for ornamental garden paths. The metal itself was isolated in 1808 by Humphry Davy at the Royal Institution in London which he did by the electrolysis of a paste of strontium chloride and mercury oxide.

Strontium is the 16th most abundant element on earth and widespread, with some soils having as much as 3500 ppm (0.35 per cent). The large celestite deposits in Gloucestershire supplied almost all the world's strontium needs until World War II. The last mine there closed in 1994, not because the ore had been used up, but because China could mine it cheaper: China is now the leading producer of strontium. Demand is currently 140 000 tonnes per year.

Strontium becomes immobilized in the environment as insoluble strontium carbonate and is incorporated into the shells of deep sea creatures. Strontium has no function in the human body but it is present in our bones on account of its similarity to calcium. Indeed strontium salts are now given to treat osteoporosis because it stimulates bone growth and bone density. Strontium chloride hexahydrate (SrCl2.6H2O) is also an ingredient in toothpastes for sensitive teeth, plugging the holes which give access to the tooth's nerve.

Strontium was once widely used in the separation of sugar from sugar beet molasses. The sugar was precipitated as strontium disaccharide and then released with CO2 to produce sugar and strontium carbonate. Strontium was also added to the glass of old-style television sets to absorb the secondary X-rays emitted by cathode ray tubes. 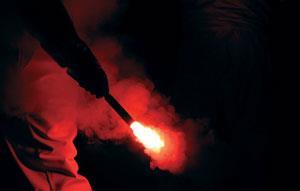 A colourful use of strontium, and one for which the element cannot be substituted, is the use of Sr(NO3)2 to provide the intense red of warning flares and it is also used in fireworks. Modern glow in the dark paints rely on strontium aluminate, which absorbs light during the day and releases it slowly for hours afterwards. In addition, strontium titanate (SrTiO3) has been used in optical devices and crystals of the compound out-sparkle diamond because they have a higher refractive index. However, the crystals have not been widely used as gemstones because their surfaces are easily scratched.

Isotopes, natural or not

Strontium's non-natural, radioactive isotopes are also important - and in one instance worrying. Strontium-90 (half-life 29 years) was produced by above-ground nuclear explosions from 1945 and became a major environmental contaminant. It is an intense β-emitter and a serious threat because ionizing radiation is capable of causing serious damage to dividing cells. Readers who were babies in the 1950s will still have some of this radioactive isotope in their bones. Strontium-90 is also a by-product of nuclear reactors and is extracted from spent nuclear fuel as its high energy radiation can be utilised to generate electricity for space vehicles, remote weather stations, and marine buoys. Some of the isotope is also used in thickness gauges for measuring paper, plastic film, fabrics, and paints.

Another radioactive isotope, strontium-89 (half life 50 days) is also a β-emitter and offers a treatment for bone cancer because it concentrates in the active area where the cancer is growing and destroys it. Strontium-87m (half-life 2.8 h) is used for diagnostic purposes in medical research. It quickly disappears from the body, and within a day less than 0.3 per cent of the dose remains. 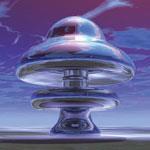