John Emsley, University of Cambridge, takes you on a tour of the periodic table. In this issue: Wear it sparkling on your finger, zirconium is also key to nuclear energy

The name zirconium comes from the Arabic word zargun, which refers to zircon, a golden-hued gemstone known since Biblical times. In the Middle Ages colourless gemstones of zircon were thought to be an inferior kind of diamond, but that was shown to be wrong in 1789 by German chemist, Martin Klaproth (1743-1817), who analysed one and discovered the new element, zirconium.

Klaproth was unable to isolate the metal, this was achieved by the Swedish chemist Jöns Jacob Berzelius in 1824. At the time chemists could find little use for zirconium or its chemical compounds, and so the element fell into obscurity for a century or more. Today artificial gems are made from zirconium oxide or 'cubic zirconia' and they sparkle with more brilliance than diamond though they are not as hard. What distinguishes them from real diamond is their higher density of 6.0 g cm-3 compared with diamond's 3.52. 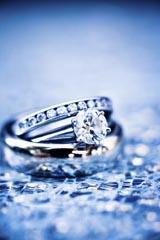 Zirconium is abundant in S-type stars in which heavier elements are formed by neutron capture. Traces of the element are also present in the Sun, and rock brought back from the moon was found to have a surprisingly high zirconium content.

Down here on Earth scientists have recently discovered that zircons from the Jack Hill region of Western Australia were around 4.4 billion years old and this together with their oxygen isotope ratio of O16/O18 suggested that they could only have been formed when there was liquid water on the surface of the Earth, which is nearly 500 million years earlier than previously assumed.

Today the element is widely used, as zircon (zirconium silicate), zirconium oxide and as the metal itself.

Zircon sand is use for foundry equipment - in the heat-resistant linings for furnaces and to make foundry moulds and giant ladles. Mixed with vanadium or praseodymium, zircon makes blue and yellow pigments for glazing pottery and tiles.

Zirconium oxide, with a melting point of 2715ºC, is used to make heat-resistant crucibles, ceramics and abrasives. A red-hot crucible made from ZrO2 can be plunged into cold water without cracking. Zirconium oxide is stronger than toughened steel and is also used for knives, scissors and golf irons. The production of pure zirconium oxide is ca 25,000 tonnes per year, some of which goes into other products, including cosmetics, antiperspirants, food packaging, and even fake gems. The paper and packaging industry finds that zirconium oxide makes good surface coatings because it has excellent water resistance and strength, and is non-toxic.

Zirconium metal has an oxidised surface which is both hard and impervious to chemical attack, making it ideal not only for use in chemical plants but also for body implants such as hip replacement joints. In the 1940s scientists discovered that the metal was ideal for use inside nuclear reactors and nuclear submarines because it does not corrode at high temperatures, nor absorb neutrons to form radioactive isotopes. Today the nuclear industry buys almost all of the metal that is produced and some nuclear reactors have more than 100km of zirconium tubing. As mined, zirconium contains 1-3 per cent hafnium, which is chemically very similar, and though it is difficult to separate the two elements this has to be done if the metal is to be used in the nuclear industry because hafnium absorbs neutrons strongly.

A few other zirconium-based materials are worth a mention. Zirconium-aluminium alloy is used for top-of-the-range bicycle frames because this alloy combines strength and lightness; and zirconium-niobium alloy is superconducting below 35K (-238ºC) and thus conducts electricity with no loss of energy. Finally, zirconium tungstate (ZrW2O8) actually shrinks as you heat it, at least until it reaches 700ºC when it decomposes into ZrO2 and WO3.

Atomic number: 40; atomic mass: 91.224; melting point: 1852°C. Zirconium is in Group 4 of the Periodic Table and is a metal that prefers oxidation state (IV), as in the oxide, ZrO2 and the chloride ZrCl4, but it can exhibit lower oxidation states such as ZrCl2 and ZrCl3. Zirconium does not dissolve in alkalis or acids except hydrofluoric acid. The chief ores are zircon (zirconium silicate, ZrSiO4) and baddeleyite (zirconium oxide, ZrO2). World production of zircon is around one million tonnes a year, though only around 1 per cent of this ends up as the metal.