From Faraday to today 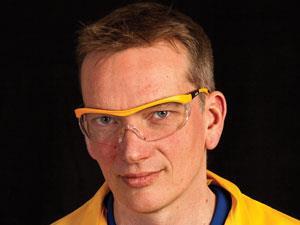 When I was asked to give the 2012 Royal Institution Christmas Lectures I was excited for a number of reasons; obviously I was thrilled that I had been chosen, but I was also pleased that finally the lectures would have a chemistry theme once again. Some of the very earliest lectures were deeply rooted in chemistry and the very first lecture on this subject was given by none other than Michael Faraday himself. Faraday initiated the lectures for young audiences in 1825 but did not give one himself until two years later. The title of his first series was just 'Chemistry'.

Faraday's passion for science developed at an early age. While an apprentice at a bookbinders, he had access to scientific books, and greatly enjoyed 'Conversations in Chemistry' written by Jane Marcet. He set up a little laboratory at his work in order to carry out some of the experiments from the book. He even converted the fire there into a temporary furnace so he could carry out simple metallurgical experiments.

Faraday was also keen to attend scientific lectures and in 1810 attended courses 'Illustrated with Experiments and Observations' given by a Mr Tatum at his house in London. Faraday's big break came after attending a series of demonstration chemistry lectures at the Royal Institution given by Humphry Davy in 1812. Faraday presented Davy with a beautifully bound copy of the notes he had taken which led to Davy appointing Faraday to assist him and take notes for him after he had injured himself while experimenting on nitrogen triiodide. 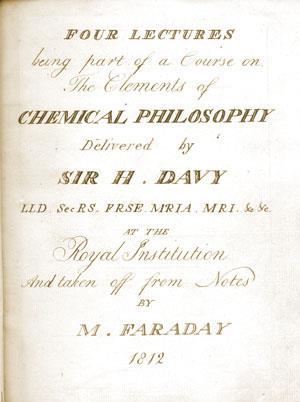 One of the real highlights for me at the Royal Institution was being able to look through Faraday's note books - not only the notes he took from Tatum and Davy's lectures, but also his own plans for his first Christmas Lecture series. I only had a chance to inspect them closely after I had finished my lectures, but I was immediately stuck by the similarities between our lectures. My lectures were on the modern elements but centred around the ancient elements of the Greeks - Air, Water and Earth. With only three lectures in the series these days Fire did not get its own lecture but still featured in all the others! There were six lectures in Faraday's first series and Lecture II was titled 'Atmospheric Air and its Gases', Lecture III 'Water and its Elements' and the final lecture was on 'Metals and their Oxides - Earths &c'.

It was also comforting to realise that some of the classic experiments are timeless and remain enjoyable throughout the ages. In one of Tatum's lectures, Faraday describes how 'a large bladder was filled full of oxygen and hydrogen gases' and exploded after which 'the bladder was dispersed to all parts of the room.' For my lectures we had progressed from the bladder to a large latex balloon, but the reaction from the audience was just as inspiring. Faraday also describes numerous experiments with electrical sparks and magnets. I like to think he would have been impressed by the million volts given out by the Tesla coil in his lecture theatre last Christmas, and by the mesmerizing superconductor whizzing round the mind-bending magnetic Möbius strip.

Like Faraday and so many other chemists, my interest in the subject started at a young age. I too assembled a small laboratory at home and over the years I managed to acquire all sorts of things that would be very difficult to come across now, including sodium, white phosphorus, all the concentrated acids and even benzene. I would spend hours in my lab and carry out experiments from books I would get out from the library. Sadly, chemistry sets are no longer quite as much fun as they used to be since the manufacturers seem to assume that all the contents need to be safe to eat. However, it is still possible to attend exciting demonstration lectures. I was fortunate to be one of the last groups of students to see the legendary Colonel Shaw from Nottingham whose pièce de résistance was firing a candle from a musket through a sheet of plywood. I also vividly remember John Salthouse's lecture where he always seemed to manage to set the bench on fire with an abundance of diethyl ether. Such demonstrations have a huge impact on their audience and certainly furthered my interest in this wonderful subject and also helped to shape the demonstration lectures I now give.

As educators, all we need to do is give a chance for our youngsters to see how fascinating and far-reaching this subject is...

Despite the passing of these two masters, there are still plenty of enthusiasts continuing their legacy. What's more, the Royal Society of Chemistry works hard to ensure such demonstrations do not disappear from the classroom. I firmly believe that students should have the chance to discover the subject from an early age and I love lecturing to students just beginning to discover the subject. In the 1860s, Faraday pleaded strongly for the introduction of science into school curricula and when asked at what age it might be serviceable to introduce science teaching replied:

'All I can say is this, that at my Juvenile Lectures at Christmas time, I have never found a child too young to understand intelligently what I told him; they came to me afterwards with questions which proved their capability.'

I wholeheartedly agree and had some wonderfully insightful questions from very young students. As educators, all we need to do is give a chance for our young students to see how fascinating and far-reaching the subject is and who knows who we might inspire for the future.

Peter Wothers is a teaching fellow in the department of chemistry, University of Cambridge and a fellow and director of studies in chemistry at St Catharine's College, Cambridge, UK.

Discover teaching resources and video clips from the 2012 RI Christmas Lectures on the Learn Chemistry website.