The joys of teaching

Against the backdrop of bureaucracy and inspections, Ryan Wilson finds pockets of pleasure in the classroom, canteen and playground 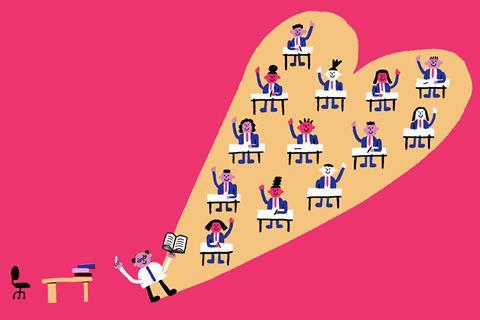 Falling out of love with teaching? Rekindle it here

How come you’re a teacher? It’s a question I, and probably you too, have been asked many times. On the face of it, it’s not hard to see why someone might be puzzled. It’s hardly a role famed for enormous salaries, or glamour. Teenagers are a reliably tough crowd. And we all know about the endless reports and data and forms and box ticking.

I used to respond by muttering something about it being challenging and rewarding. The longer version is I see two sides to the job. When I say it’s challenging, I’m talking about the admin, the bureaucracy and the paper trails which drive many of us to distraction. It’s the feeling that you’re doing some tasks for no other reason than to prove that you’ve done them, that what Ofsted want is more important than what the children in front of you need.

Every hour of every working day we’re also modelling effective communication skills, the difference between right and wrong, conflict resolution, kindness, compassion and a hundred other things

But balancing that is what goes on in the classroom. When all the other nonsense is getting on top of you, this is where the joy lies. I’m certainly not claiming that every lesson I ever taught was an educational tour de force, that the students were always angelically behaved or that they were routinely clamouring around my desk to tell me how inspired they were. It doesn’t happen every day; it might not happen every month. But what people who have never taught don’t understand is that when the fates align and everything works, when you’re on form and the kids are engaged, when they’re sparking off one another, and pushing ideas to their conclusions, and asking insightful, relevant questions, there are very few things on this Earth to rival that feeling.

And if working with young people brings its frustrations, it also brings many moments of unparalleled delight. On duty in the canteen one day two confused year 9 girls asked me, ‘is the heart part of the reproductive system?’ and I was left pondering whether it might be the most profound question I have ever heard. Another time a year 10 student answering a mock exam question which asked them to draw conclusions, drew detailed pictures. And I still smile to remember how I, a Northern Irishman, taught a London schoolgirl what a dowry is. Only for her to use the word and pronounce it in a perfect Northern Irish accent – something like ‘doy-ree’.

We teach our subject matter, of course, but it’s easy to forget we do so much more than that. Every hour of every working day we’re also modelling effective communication skills, the difference between right and wrong, conflict resolution, kindness, compassion and a hundred other things. Some kids won’t get that at home, and I very often think it’s more important than either chemical compounds or apostrophes.

Then there’s Chloe, who came to the school I was working at from Liberia speaking no English. She had witnessed both her parents being murdered. I was lucky enough to teach her in her final year, and to see her proudly accept a place at medical school not long after her peers voted her head girl. The credit is, of course, Chloe’s; her work ethic and diligence paid off. But it’s also thanks to her teachers who, over seven years, built up her skills and her confidence to the point where she was achieving top grades. And Chloe then wanted to give back to the society that helped her by becoming a doctor, and she’ll be a brilliant one. I know the system doesn’t always work as well as that, but what a beautiful and moving thing it is when it does.

The truth is teaching is an incredibly tough job. But for all its challenges, the classroom part of the work is, at its best, surely among the most noble, most satisfying, most important, most fun thing you can do. It is, truly, a remarkable job.

Ryan WilsonRyan Wilson is a writer and former English teacher.