The chemistry of the combustion engine

Delve inside the explosive world of the four-stroke engine

Approximately one billion cars on the road use petrol to get around. And while the basic principles of the internal combustion engines that they rely on haven’t changed dramatically for almost 150 years, a surprising level of chemistry goes into powering our vehicles. 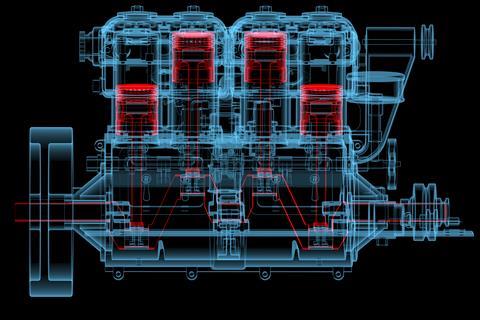 The words ‘car’ and ‘explosion’ don’t mix. But it’s the piston-powered explosions in the combustion engine that make your vehicle move

Most cars use a four-stroke engine, designed by Nikolaus Otto in 1861. This engine has a series of holes, called cylinders, with a piston inside. As the piston lowers, it drags in air and petrol, a mixture of hydrocarbons and additives to protect the engine. The piston then moves up, compressing the mixture and creating an ideal mix of temperature – up to 2500°C – and pressure. Once the piston reaches its top position, a spark is created.

We now have the key ingredients for combustion – oxygen, fuel and heat – which cause an explosion that sends the piston down again. On its way back up, the piston squeezes out the waste products of combustion as exhaust and resets for the cycle to start again. By attaching the bottom of the piston to a crankshaft, the explosions generated by each cylinder power the car. The whole process is fast: a Formula One car’s crank turns at about 15,000 revolutions per minute, which works out at approximately 50,000 explosions in its engine every single lap.

There are a lot of problems with this set-up, though. First, it’s incredibly inefficient. Although hydrocarbons contain a lot of chemical energy, most of this is lost as heat rather than powering the car. Even the most efficient combustion engine can only operate at 50% thermal efficiency. It’s also hard to get the exact balance of fuel and air in an engine to ensure complete combustion. Too little air means the fuel is ‘rich’ and more powerful, but wasteful. Too much air and the fuel is ‘lean’, which produces less power and makes the engine burn hotter.

The world is moving to electric cars, which use lithium-ion batteries, have a much higher efficiency (up to 90%) and virtually no emissions

The explosions can be a problem, too. Early petrol engines often had a problem with ‘knocking’, where small pockets of air in the cylinder would ignite on their own, rather than the piston being pushed down by a smooth wall of flame. This was solved by a chemist, Thomas Midgley Jr, who suggested adding tetraethyl lead to petrol. If a pocket was created, rather than interrupt the cycle it would just form small lumps of lead, or lead oxide gas, that could be pushed out in the exhaust. Unfortunately, lead is toxic to humans, leading to brain damage and its expulsion in car exhaust proved deadly. Today, leaded petrol is banned worldwide and knocking is solved by other means.

Then there’s the waste gas. The incomplete combustion in the engine results in exhaust that includes hydrocarbons, carbon dioxide (CO2), carbon monoxide (CO) and a mix of nitrogen oxides (NOx), which can cause acid rain. These atmospheric pollutants are all terrible for the planet so almost all modern cars include a catalytic converter in their exhaust – a small box containing a ceramic honeycomb structure, filled with metals such as platinum or palladium. When hot enough (about 400°C) the metal reacts with the waste gases from the engine, resulting in the oxidation of CO into CO2 and the oxidation of unburnt hydrocarbons into CO2 and water. Modern catalytic converters are ‘three way’, so also reduce NOx gases by first reacting them with CO to form nitrogen.

Despite all these efforts, it’s hard to escape that the internal combustion engine is bad for the planet. The International Energy Agency estimates that transport accounts for a quarter of global CO2 emissions – and three-quarters of it from road traffic. That’s why the world is moving to electric cars, which use lithium-ion batteries, have a much higher efficiency (up to 90%) and virtually no emissions. Even so, with one billion cars out there, it’s going to take decades before petrol and diesel vehicles vanish for good and we finally move to cleaner and more efficient ways to get around.