We’ve all been caught out by an unexpectedly frosty morning: you’re ready to leave for an important day only to be wrong-footed by an iced-up car windscreen. A hunt for a suitable tool for clearing it begins in earnest. It’s always such a relief to find a bottle of de-icer rattling around beneath one of the seats – a much better idea than the old credit card you’re currently using to scrape the ice from the car. 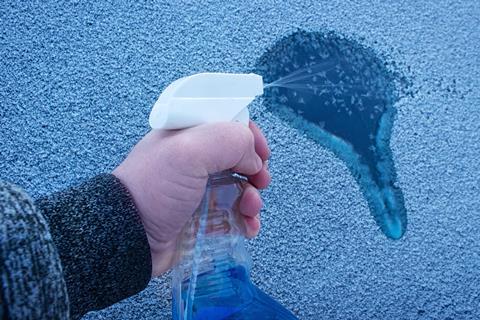 The satisfying spray that melts your cold morning problems away

This effect isn’t unique to ethylene glycol. It’s quite a common phenomenon that happens when another molecule interferes with a solvent’s attempt to organise itself into a solid structure. Sodium chloride does this too. It’s spread on pavements and roads, usually in the form of grit or rock salt, and prevents ice forming by lowering the water’s freezing point to around -10°C.

That’s fine for most parts of the UK, but where colder temperatures are common, calcium and magnesium chlorides are often used instead. These lower the freezing point of water even further.

Whether it’s spread on the road or squirted on a windscreen, all chemicals used to remove or prevent ice end up on the ground eventually, so their effects on animals and plants must be considered.

Ethylene glycol is very toxic – acting in a similar way to ethanol but with more harmful metabolites. Unfortunately, it tastes lovely and sweet and therefore most consumer-grade de-icer today contains bitter flavourings designed to stop cats and dogs from licking it off the pavement, and to deter students from drinking it at parties.

In 1985, a small number of unscrupulous wine producers in Austria added a dimer of ethylene glycol (diethylene glycol) to their wines to make them taste more full-bodied. This was uncovered by quality control laboratories and the wines were quickly withdrawn from sale. It took Austria’s wine industry over a decade to recover from the bad publicity.

Thankfully, ethylene glycol decays in soil and water within 10 days or so. This means the amounts used for domestic purposes are unlikely to cause harm to the environment.

Sodium chloride is naturally occurring and doesn’t present a significant poisoning risk. However, there is a reason we don’t tip it over our cars on a frosty morning – it is an excellent catalyst in the production of rust. This is why it’s important to regularly wash cars that have been driven on gritted or salted roads. 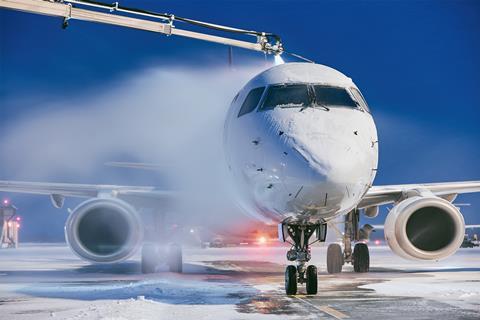 Concerns about prematurely rusty planes are why sodium chloride isn’t used for preventing or clearing ice on airport runways. Ethylene glycol is often used instead. Because airports use tonnes of chemical de-icers in a single winter’s day, both on the runways and to de-ice planes, measures are needed to prevent environmental harm. Many airports capture these chemicals as they run off the runways and taxiways, and then either recycle or process them safely.

So, next time you arrive flustered at your car to find a frozen windscreen, don’t reach for a kettle full of hot water (a particularly bad idea since it can crack your windscreen) or start a physical workout scraping it with your precious credit card. Instead, you can – guilt free – enlist the help of a chemical de-icer. Spray it on and enjoy the show!

Like this article? Check out this (n)ice TikTok video too.