Aromatase: a target for cancer treatment

The enzymes of the cytochrome P450 family catalyse a variety of oxidation reactions. One of these enzymes - aromatase - plays an important role in the growth of human tumours. Its recently solved structure should lead to new anticancer drugs. 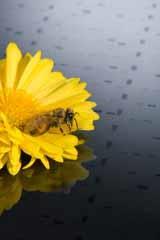 Evolution not only produces families of related species, it also gives new families of related genes and proteins, the latter arising from gene duplication and the slow divergence of the two versions. The largest family of proteins is the cytochrome P450 (Cyt P450) proteins, named because of their colourful appearance, their absorption at 450 nm and lack of any information regarding their function.

These Cyt P450 proteins occur in various forms in virtually every organism. There are often dozens, and in some plant species, there are even hundreds of them. Genome studies have revealed, for example, that the honeybee has 46, humans have 55, and the rice plant has 356 genes for such proteins.1

We now know that these enzymes are all involved in oxidation reactions, using an oxygen molecule bound to iron at the centre of their haem cofactor. (A cofactor is the non-protein part of the enzyme which is essential for the catalytic activity of the enzyme.) And since they only use one of the oxygen atoms in the oxygen molecule as an electron acceptor, which ends up in a water molecule, they are also known as mono-oxygenases. The other oxygen atom is used by the enzyme to do some chemistry. There are so many different Cyt P450 proteins because there are so many things that enzymes can do with this spare oxygen atom.

The key areas in which these oxygenases are active are in hormone synthesis, the hydroxylation of fatty acids, and the degradation of foreign organic molecules, which has important implications for the fate of drugs in the body. They also serve as models for fundamental studies into biophysical phenomena such as electron transfer in proteins. Here we focus on their role in hormone synthesis. 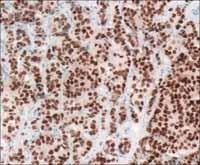 Various members of Cyt P450 family are involved in the production of cholesterol and in the subsequent conversion of this molecule into steroid hormones, including the sex hormones testosterone, oestradiol, and androsterone.

The biosynthesis of cholesterol, much like the related synthesis of ergosterol in fungi and of phytosterols in plants, depends on the function of a specific member of the Cyt P450 family, demethylase enzyme (CYP51). Scientists think that these enzymes are similar to the common ancestor of cytochrome P450 proteins in higher organisms, from which all the others branched out, including those that catalyse individual steps in the conversion of cholesterol into hormones like testosterone, oestradiol, and androsterone.2

Along the pathways of hormone synthesis, different cytochrome P450 proteins catalyse specific modifications to the carbon backbone of the molecules. Up to six such enzymes can take part in the synthesis of one hormone. The first reactions starting from cholesterol are typically located in the mitochondria - the compartments of the cell that specialise in energy metabolism. Further down the production line, however, some of the syntheses take place in the endoplasmatic reticulum (ER), an extensive system of membrane-enclosed spaces, some of which bud out to form small capsules known as microsomes. The Cyt P450 enzymes are anchored in the membranes of either the mitochondria or the microsomes.

One of the Cyt P450 enzymes, which is located in the microsomes and is involved in the synthesis of sex hormones, is aromatase. This enzyme converts male sex hormones (eg testosterone) into female ones (eg oestradiol), which constitutes the final step in the synthesis of the female hormones. Aromatase cleaves a methyl group off the A ring of the steroid backbone and converts the aliphatic ring into an aromatic one (Scheme 1), hence the name. So far, aromatase is the only enzyme known to science that can make a ring aromatic. 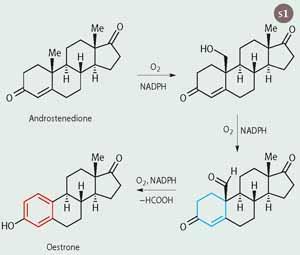 Scheme 1 shows the conversion of androstenedione to oestrone, which involves three oxidation steps. Each of the steps requires an oxygen molecule and the redox cofactor NADPH. In the third step a non-aromatic ring (blue) is converted into an aromatic one (red).

Aromatase has attracted a lot of interest for medical reasons as well. Around three quarters of breast cancer patients have an abnormally high concentration of oestrogen in their tumours. Researchers believe that in these cases the tumour cells have specifically activated aromatase to produce more oestrogen than normal cells would, which enhances the tumour growth.

To stop the growth of oestrogen-responsive tumours in post-menopausal patients, doctors prescribe aromatase inhibitors such as exemestane (1), in combination with cancer drugs like tamoxifen. Exemestane suppresses the physiological effects of oestrogen by blocking its receptor. This is confirmed by computer modelling studies,3 which have shown how subtle differences in binding geometry cause exemestane to bind irreversibly to the enzyme, making it a powerful inhibitor.

Before the menopause, women produce much larger amounts of oestrogen in their ovaries, which would be difficult to shut down. Moreover, since aromatase inhibitors can interfere with birth control and harm the fetus, they are not normally prescribed for younger patients who haven't completed the menopause.

Last year, Debashis Ghosh and his colleagues at New York State University at Buffalo published a high-resolution x-ray crystal structure of human aromatase.3 This work may well lead to new kinds of drugs against oestrogen-dependent cancers.

A remarkable feature of this structural work is that the researchers used the complete enzyme purified from human tissue, specifically human placenta, rather than recombinant proteins produced in bacteria, which is what most research uses today. Ghosh and coworkers solved the structure of the protein with all its 496 amino acid residues at 2.90 Å resolution. 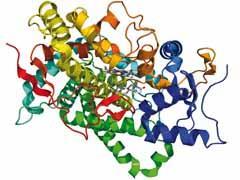 The structure reveals the typical folding pattern of the cytochrome P450 family, which is dominated by α-helices. Apart from the polypeptide chain and the haem cofactor (as in haemoglobin), the structure also contains the substrate molecule androstene-dione. In principle, the enzyme should convert this molecule into oestrone, but it would need the redox cofactor NADPH to do that, so in the absence of that factor the researchers could crystallise the enzyme and substrate together without risking a reaction.

Thus, Ghosh and his team could analyse the enzyme-substrate contacts directly from the crystal structure. The structure shows the A ring of the steroid backbone surrounded by a hydrogen bonding network involving the amino acid side chains alanine-306, asparagine-309, and threonine-310. From this detailed information, the researchers also derived a hypothetical reaction mechanism, which they will test experimentally by mutating these amino acids.

Specifically, the researchers predict the presence of a catalytic water molecule, which is not visible in the crystal structure but would fit between the threonine and the substrate. The ketone-enol isomerisation at the A ring could then be initiated by a nucleophilic attack from the alanine-threonine-water network, with the protonated asparagine serving as an electrophile. For the oxidation and removal of the methyl group the researchers support the mechanism that has been proposed previously.4

Using computer modelling, the researchers also had a look at the mechanism of action of the aromatase inhibitor exemestane, by replacing the substrate in the model with the structurally similar inhibitor. The only structural difference between the two molecules is that the inhibitor has an additional methylidene (=CH2) group attached to C6 of the steroid backbone. Ghosh and colleagues believe that this group could get locked in tightly by a hydrophobic pocket in the protein structure, reducing the mobility of the nearby threonine-310 residue and blocking the movements necessary for the catalytic reaction. Since it binds more tightly than the intended substrates, exemestane acts as an irreversible inhibitor in that it typically takes the enzyme molecule it binds to out of action for good.

With this detailed information, molecular biologists can devise experiments to probe the details of the enzyme's function, while drug developers can develop alternative inhibitors with improved properties.

Michael Gross is a science writer based in Oxford. He can be contacted via his website.