Pain and terror were features of surgery until the mid-1840s. Anaesthetics changed this, though the first one, nitrous oxide, gave the surgeon only a minute to operate before the patient regained consciousness. Longer acting agents were introduced but their use was not without hazards, and it was left to chemists to come up with acceptable alternatives. 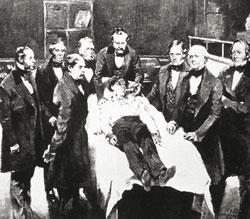 Eye surgery carried particular risks. Unless the patient was deeply anaesthetised, the eye would move on the slightest touch, making surgery difficult. To suppress this reflex required high doses of ether or chloroform which irritated the lungs to the extent that the patient would cough and vomit for 24 hours after the operation. This would raise the pressure in the eye ball so high that the surgeon's fine stitches would tear out, with disastrous consequences.

It was to take some 40 years before eye surgery could progress further - and then through the influence of Sigmund Freud. He was interested in cocaine, which was becoming increasingly available in the second half of the 19th century, as an apparently harmless stimulant, safe enough to be incorporated in tonic drinks such as Coca Cola (1885). In 1880 Vassily von Anrep reported the anaesthetic effect1 of cocaine when injected or applied to mucous membranes. Although he suggested this might have medical applications, this was not pursued.

In his enthusiasm for the drug, Freud tested its effects on himself and introduced cocaine to Carl Koller, an ophthalmologist working at the General Hospital in Vienna. Koller had been trying to anaesthetise the eye prior to surgery by using solutions of morphine sulfate or chloral hydrate. Noting that cocaine made his lips numb, Koller decided to try its effects on the eye. He cautiously applied a solution of cocaine hydrochloride to a frog's eye and found it became insensitive to touch. Then he applied the solution to rabbits, then dogs, and finally himself: '.We (Koller and an anonymous assistant) trickled the solution into each others' lifted eye-lids. Then (we) placed a mirror before us, took pins and with the heads, tried to touch the cornea. Almost simultaneously we were able to state jubilantly " I can't feel a thing'". Koller presented his results to an ophthalmological conference in September 1884, opening a new era in eye surgery.

The following year, not only was cocaine hydrochloride shown to be an effective anaesthetic when injected directly into local tissues, but its ability to block nerves was demonstrated, leading to much wider effects. William Halsted found that if cocaine was injected, not around the base of a tooth but some distance away, near the main sensory nerve that carries all sensations from that area of the jaw, then the numbness would last about 30 minutes. This was sufficient for fillings and reconstructive dental surgery. This discovery put dentistry onto a professional level rather than a 'tooth-pulling' trade. Also in 1885, James Leonard Corning noted that injecting cocaine into the spinal fluid induced anaesthesia in the lower limbs. This made it possible to carry out surgery on patients who were otherwise too ill or too frail to survive inhalation anaesthesia.

However cocaine use was not without hazards, and some patients died. Moreover:

The toxicity of cocaine may initially appear confusing. As little as 18 mg intravenously has proved lethal, yet other patients have withstood injections of as much as 1.5 g. While a few individuals are particularly sensitive to the drug, the key issue is the amount that reaches the circulation, which can affect the heart, causing heart failure. If the injection avoids major blood vessels, then it remains as a depot, gradually diffusing round the body, and gradually being broken down in the liver. In dentistry, 10 mg was thought to be sufficient to extract a single tooth and 15 mg was the maximum amount recommended to be injected in one day.

Keeping to these limits, dentists ensured the safe use of cocaine though its former reputation for fatal complications left them apprehensive about its use. A somewhat haphazard search began for safer, synthetic alternatives. Many chemicals, both organic and inorganic, were injected to see if they had any effect. Respected pharmacologist Oscar Liebreich reported success with ammonium chloride and bromide (but not the nitrate or carbonate), lead ethanoate, hydroquinone (benzene-1,4-diol) and resorcinol (benzene-1,3-diol).1 However, none was sufficiently attractive to enter anaesthetic practice. Subsequently, and more profitably, attempts were made to modify the basic cocaine molecule, even though its structure at the time was still subject to speculation. The most successful of these was tropacocaine (1), introduced in 1891, which achieved minor success in spinal anaesthesia.

Chemistry comes up with alternatives

In 1898 Richard Willstätter published the correct structure for cocaine (2).2 Almost immediately the molecule was 'disconnected' to see if a sub-unit within it might be responsible for its anaesthetic activity and therefore be amenable to chemical manipulation.

Chemist George Merling pursued the methylpiperidine strand (3) and tested a variety of related compounds. Although he published his finding a year before Willstätter produced his structure for cocaine, the methylpiperidine unit had been recognised since before 1891. The most successful of his products were the N -methylpiperidine derivative, α-eucaine (4)3 and, even more so, the 'un-N -methylated' material, Beta-eucaine (5).

The former was cheaper than cocaine, less toxic and stable in boiling water, thus permitting sterilisation. Moreover, α-eucaine was non-addictive. But not everything was perfect. This molecule was an irritant, and injection sites remained sore long after the anaesthesia had worn off. Beta-Eucaine had all the same advantages and, when injected as the lactate salt, caused little irritation. Beta-Eucaine was at the height of its popularity in the first decade of the 20th century, but by 1940 it had been replaced by other agents. 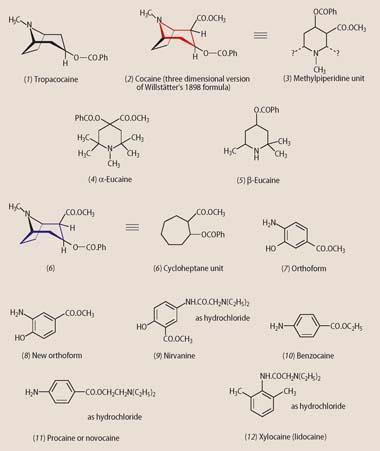 Munich chemist Alfred Einhorn investigated the second component of the cocaine molecule, the cycloheptane moiety (6). Somewhat curiously though, he concentrated on six-membered ring structures and on aromatic, rather than aliphatic rings, justifying his decision on the grounds that these species were more technically accessible.4 With an eye to the features that probably contributed to the mode of action of cocaine, he initially substituted his benzene rings with -CO.OCH3, -O.COPh and (possibly with a nod towards Merling's beta-eucaine), -NH2. He soon found that benzoylating a phenol group to form -O.COPh conferred no advantage over the parent -OH group. In 1898 he announced two species, orthoform (7) and new orthoform (8).

The latter was the more attractive because it was cheaper, derived from 4-hydroxybenzoic acid, a byproduct from the Kolbe synthesis of salicylic acid. These insoluble powders achieved modest success as anaesthetic dusting powders for use on wounds and ulcers. Attempts to 'solubilise' the molecules by converting them into their hydrochloride salts were successful, but the products (salts of a weak base + a strong acid) were too acidic for patient comfort. Einhorn then incorporated the strongly basic diethylamino group within the molecule. This reacted with the HCl solubilising agent to yield a neutral salt, which could then be injected without painful consequences. Nirvanine (9), derived from an isomer of Einhorn's orthoform, was introduced in 1898. The molecule was readily soluble in water (as the hydrochloride) and less toxic than orthoform, but met with little success because it was more of an irritant than other injectable agents.

In 1902 manufacturing pharmacist Eduart Ritsert reported the synthesis of benzocaine (10).5 This had some of the features of orthoform, namely, the aromatic ring, the -NH2 group and an ester grouping (ethyl, in this case). Benzocaine was initially reported to be non-toxic but it has recently been associated with fatalities, mainly in connection with accidental overdose of, for example, teething gel. The anaesthetic is unsuitable for hypodermic injection because of its very low solubility but it continues to be used topically. It is also found in sprays and pastilles to relieve sore throats, in sunburn creams and (maybe surprisingly) the manufacture of some condoms.

Einhorn seized upon benzocaine and decided to add one of his solubilising groups to address its key drawback. Again, the diethylamino attachment achieved the desired effect and the anaesthetic known as procaine (11) or novocaine (4-aminobenzoic acid 2-(diethylamino)ethyl ester) was born, patented alongside 17 analogues, in 1904.6 This compound was well tolerated by patients and had none of the drawbacks of cocaine. Even in 10 per cent solutions, procaine could be injected without causing discomfort. These higher concentrations, and thus smaller volumes, meant freedom from the internal tissue bruising and later pain caused by injection of large volumes of very dilute cocaine.

Although procaine was a weaker anaesthetic than the natural alkaloid, in the 1890s chemists discovered that less cocaine was needed to achieve anaesthesia if the drug was confined to the site of the injection, and allowed to diffuse out only slowly. Various means were used to achieve this: compression with the fingers; tourniquets; application of ice packs; or cooling with an ether spray. In 1896 the same effects were induced chemically: a very dilute solution of adrenaline was added to cocaine. This caused the blood vessels to constrict, reducing not only bleeding but also the rate at which cocaine was carried away from the injection site. Eventually, it became standard practice to apply this technique to procaine injections too. Only small amounts of adrenaline - never more than 0.5mg - were recommended. By 1914 procaine was in widespread use by dentists and anaesthetists for local anaesthesia and this continued until well after World War II. (Indeed, it remains in use today to minimise pain from deep intramuscular penicillin injections in the product Bicillin.)

In its day, procaine was the gold standard against which other agents were measured. Its Achilles heel was its potential to cause allergies in a few patients and practitioners - not so much to the parent drug, but its metabolite, 4-amino benzoic acid. Eventually, in 1943-46 Nils Lofgren and Bengt Lundquist of Astra Chemical were experimenting with xylidine derivatives, some of which contained nirvanine's -NH.CO.CH2 N(C2 H5)2 side chain. Xylocaine (lidocaine, 12) had all the advantages of Einhorn's procaine and added a few of its own: it caused no allergies; and it was a more potent agent - anaesthesia could be induced with less of the drug.

Although procaine's days were almost over as a local anaesthetic, there is an interesting post-script to this story. During the 1950s it gained some popularity, and later notoriety, as the main component of Gerovital H3. This was a mixture of drugs promoted by the Romanian doctor Ana Aslan as an anti-ageing treatment. It was allegedly administered to a range of national leaders and celebrities. Even after it was discredited in the 1960s, Gerovital treatment centres were still being promoted as tourist attractions in Romania in the late 1980s. Procaine had a central role in the revolution of effective local anaesthesia, but it was not the fount of youth.

Jesús Calatayud's paper on the History of the development and evolution of local anesthesia since the coca leaf deals excellently with the cocaine story, though all chemical formulae are omitted.7 Post-cocaine developments are reviewed in the text by Dyson and May, though picking out a chronology is sometimes difficult.The text by Schlesinger presents a picture of the situation just before World War I9 and Bankoff's book has a good historical (but essentially non-chemical) section on the development of local anaesthesia.10 A good account of the history of dentistry is available on the Internet.11

Alan Dronsfield is professor of the history of science at the University of Derby, DE22 1GB. Peter Ellis is professor of psychological medicine at the Wellington School of Medicine and Health Sciences, University of Otago, PO Box 7343, Wellington South, New Zealand. Dr Keith Pooley formerly practised as a surgeon at the Walsall Hospital Trust and may be contacted via e-mail (keith@keithpooley.wanadoo.co.uk).

But doctor, it still hurts

Most practitioners will have come across patients who claim to be 'untouched' by local anaesthetics. There are several reasons why, on rare occasions, this might happen.