Fire and light in the sky

A close look at the history and science of fireworks, used over centuries in celebrations across the world 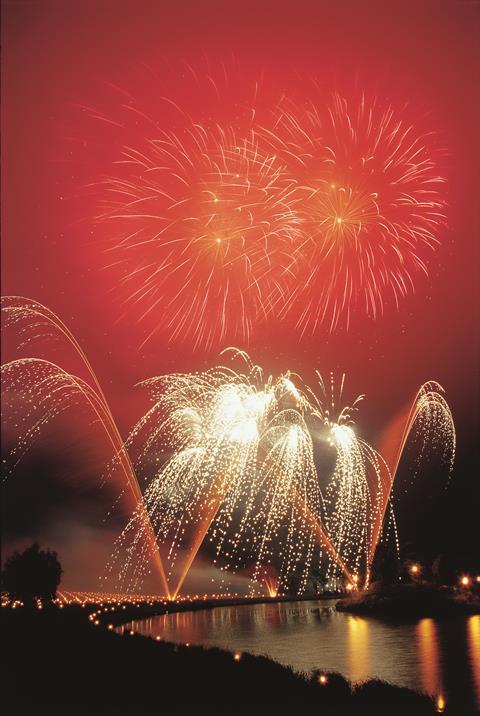 The origins of fireworks can be traced back to 9th century China, when gunpowder was accidently discovered while experimenting with salts to find the elixir of life. What the Chinese had actually unearthed were nitrate salts, and they were possibly surprised to find that these oxidising agents burnt when mixed with fuel in the form of honey. In the course of time the mixtures were improved by the addition of alternative forms of carbon, but not until sulfur was added was a reasonably efficient product produced. By around AD 1044 the chemical make-up of gunpowder had evolved to approximately 60% potassium nitrate, 30% sulfur and 10% charcoal.

It is believed that the Arabs brought news of the material to Europe. Also, Roger Bacon - who gave the first written account of gunpowder and its use in fireworks during the 13th century - possibly gained his knowledge from Arab writings. Around this time, the Chinese started placing the new explosive powder into bamboo tubes, and having sealed the ends, threw them on to a fire so that they 'cracked'. This was to ward off evil spirits, the tubes frequently later being painted red, a characteristic of religious objects and maybe the origin of the word firecracker.

By the mid 14th century the gunpowder mixture was coming close to the optimum formula with as little as 10% sulfur. Indeed the best combination was being produced over 200 years ago with 75% potassium nitrate, 15% charcoal and 10% sulfur, but its performance was unpredictable due to variability in the quality of the materials and the method of production. The type, as well as the ash content of the charcoal, is important and the burning speed of the finished powder is related to the milling time of the powder, its further compaction and formation into various granulations. It was also during the 14th century that gunpowder was first used in warfare. 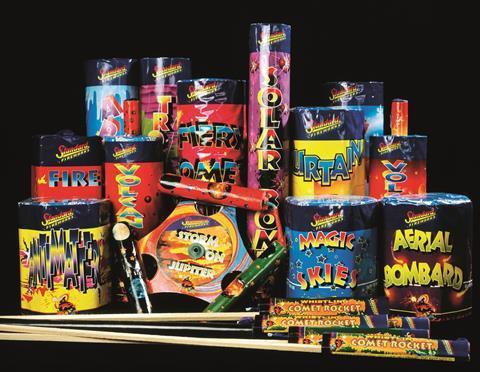 Fireworks come in all shapes, sizes and colours, and are packed full of chemistry

Until 1800 most firework mixtures were based on variations of the gunpowder mix. Modern day fireworks only came into being with the discovery of the powerful oxidising agent potassium chlorate by Claude Louis Berthollet in 1786, and the isolation of aluminium and magnesium (used as fuels) later on.

Firework displays before 1800 would have been mostly gold, as this is the colour formed when gunpowder burns. Weak green and red colours could have also been made using barium nitrate or strontium nitrate, but most fireworks are observed at a distance and without powerful oxidising agents these colours would have been disappointing. Some white fireworks would also have been available, thanks to the addition of antimony or arsenic. Displays would have consisted of rockets, wheels, fountains and explosions. 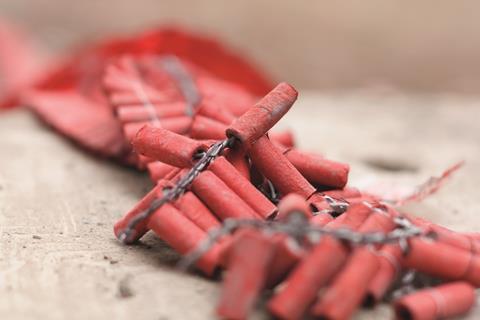 Firework mixtures today generally consist of a fuel, a strong oxidising agent and precursors for a colour-producing chemical. As a firework powder ignites, it goes through a liquid state to produce gases, flames and a residue. It is comparatively slow to burn, progressing at a speed you can watch, as opposed to an explosion, which happens in an instant and produces mostly gases.

Some modern fireworks still use gunpowder. Although it is not as cheap as it used to be, it is needed to propel star shells and rockets into the air and make explosions. Finely ground gunpowder - called meal powder - is also an important part of the mixtures used for making fountains. Its role here is to allow fine control over the burning speed. Faster burning items contain large percentages of meal powder, the slower ones contain only a small amount.

Silver sparks are achieved by adding aluminium or titanium. Aluminium burns at a range of different temperatures providing a variety of different effects, but due to problems with availability, titanium tends to be the preferred metal for this purpose. Titanium has none of the beautiful subtlety of aluminium, but does still provide a reliable silver spark.

The formation of other colours depends on colour-producing chemicals that are not always stable and because of this they are produced in the flame itself. The best emitters are copper chloride (CuCl2) for blue, strontium chloride (SrCl2) for red, barium chloride (BaCl2) for green and sodium for yellow. Mercury(I) chloride was initially used as the chlorine source, but it has now been replaced by PVC (polyvinyl chloride), Pergut (chlorinated rubber) or a chlorinated hydrocarbon called Hordaresin 70. Chlorinated forms of PVC and polyvinylidene chloride are also used. 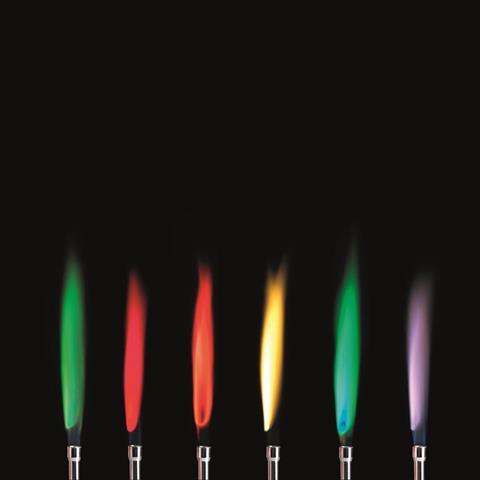 Powerful oxidising agents allow the colour in fireworks to be seen, as they help generate enough heat to excite an electron in the colour-producing chemicals, therefore causing them to emit a photon of light. Blue has always been a difficult colour for firework makers because the delicate CuCl2 molecule is easily destroyed at high temperatures, meaning the oxidiser used has to be carefully chosen.

The adsorption of water by these colour-producing precursors can be quite a problem in firework manufacture, with strontium nitrate (used to make red SrCl2during burning) being a good example of this. In practice, anhydrous strontium nitrate is only used in military flares, where it is kept in watertight containers. Firework makers settle for the slightly lower performing strontium carbonate instead. 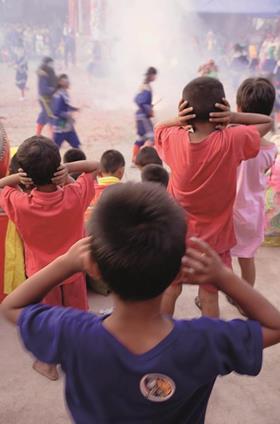 Firecrackers are specifically designed to be noisy

As well as looking pretty, fireworks are designed to have a number of different and exciting sounds: such as bangs, whistles, hums, crackles and sizzles.

Under confinement, gunpowder produces only a dull bang. In the early days it was placed in spheres or cylinders with tough walls to give bangs for signalling or pleasure. For example, lifeboat maroons (used to call the crew when the lifeboat needed to be launched) were paper cylinders tightly wound with cord and glue to give excellent compression to the powder.

With the availability of powdered aluminium and magnesium - as the fuel source - it became easier to make much louder and sharper bangs. This is because the power of the bang is determined by the burning speed of the powder mixture. Mixed with a powerful oxidising agent and as little as a half gram of potassium perchlorate, a loud noise in a thin paper tube can be made. Indeed such mixtures are quite sensitive to friction and impact, and even commercially are handled in small quantities.

People often think that whistles are produced mechanically in fireworks but this is not the case. The first whistles were made in the 19th century and consisted of potassium picrate. Carefully compressed into a short tube, this chemical produces a very shrill high pitched whistle and a stream of sooty smoke. But it is not pleasant to handle. Gallic acid was then used in the early 20th century, but problems with sensitivity to friction and impact also stopped its use. Whistles are now made with potassium benzoate, which is related to gallic acid but slightly more stable.

Benzoate whistles can be modified in such a way that instead of whistling, they sound like someone breaking wind. This is done by changing the burning speed and allowing the gas to escape through a smaller hole.

Meanwhile, humming fireworks are in fact fireworks which produce a very sharp hissing noise. The gas comes out of a small tube at a tangent which makes the tube spin in the air, causing the hiss to become a hum.

The magnesium-aluminium alloy magnalium is widely used today to give fireworks impressive noises, due to the ease of ignition. With other materials in fine powders it can burn with a sizzling whispering effect in some fireworks, but with certain materials like the oxides of bismuth, copper or lead it can give a very sharp and distinctive crackle.

Going out with a bang

Oxidising agents are very highly reactive and potassium chlorate, while very useful, is slightly too reactive (due to an unshared pair of electrons) for use in today's fireworks. It is so sensitive to friction when combined with sulfur that mixing the two was banned in the UK in the late 19th century. Potassium perchlorate is more stable and now widely used in the industry. For safer working, nitrates are always preferred, but their low melting point means that they are not so good at colour enhancing - their use is generally limited to military pyrotechnics.

Another mixture of concern is stronger, higher melting point oxidisers with the colour-producing precursors. Reactions between these can be extremely violent and explosive, with the rules for handling being very strict indeed.

Concerns over the stability of pure magnesium have led to its use being ceased as a fuel in fireworks. Meanwhile, aluminium - another of the early metals used in fireworks - is still suitable for use as a fuel because it develops an oxide coating that gives a degree of stability. Recent years have seen the extensive use of magnalium, a magnesium/aluminium alloy of about 50/50 as a fuel source.

Firework manufacture is something of an art. It is rather like cooking, in that it is very important to know the ingredients and how to mix them together. Like the world of cookery there are cooks and 'Cordon Bleu' cooks. The same applies to the manufacture of fireworks.

Ron Lancaster is a retired chaplain and chemistry teacher from Kimbolton School, Cambridgeshire, UK and the managing director of Kimbolton Fireworks

Why not use firework chemistry as a way to give chemistry undergraduates the opportunity to develop key transferable skills through problem- based learning? In an HE STEM funded project led by Gan Shermer at the University of Bath, second year university students are tasked with designing a simulated fireworks display. This project allows students to work on their communication, teamwork and leadership skills as well as gain commercial awareness in a discipline specific context. It also requires some basic undergraduate chemistry knowledge.

The activity is run over a five week period with a one hour session each week. As a team, the students are invited to pitch a possible design plan for a university graduation fireworks display. In their pitch they are asked to consider pricing, location and safety, as well as use a professional computer simulation package to design a three minute firework show. The pitch is requested as an oral presentation in the final session, with supporting written documentation.

An activity pack containing worksheets and presentations can be downloaded from Design a Firework Show on the HE STEM website and an example of a simulated display can be seen on Vimeo.

Watch the show on vimeo