The use of haloperoxidases, from seaweed, in organic syntheses is simple and cost-effective. They offer more environmentally-friendly routes to a host of compounds, providing undergraduates with a valuable laboratory experience.

Enzymes are remarkably efficient catalysts. They have high substrate specificity and, contrary to common belief, many are robust and will work well at elevated temperatures and in organic co-solvents.

All this makes enzymes viable options as catalysts in organic syntheses. The use of haloperoxidase (HPO) enzymes provides undergraduates with a good introduction both to the importance of biological molecules in chemistry and the rapidly expanding field of natural organohalogens, many of which show great potential as therapeutic agents.1,2 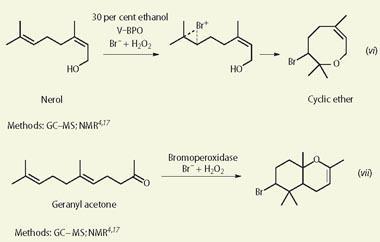 The syntheses we have chosen are well established and will be familiar to undergraduate chemistry students (see reactions (i)-(vii)). We use the enzyme bromoperoxidase (BPO) from the red coralline seaweed Corallina officinalis. This organism is readily available, though in fact many types of seaweed contain the BPO enzyme and it is usually possible to obtain a suitable organism from any coastal region. To put the experimental work into context for the students, we begin by telling them about the chemical properties of the haloperoxidases and their roles in biological systems.

There are also different types of HPOs, depending on the prosthetic group they contain at the active site, commonly iron or vanadium. The haem-containing HPOs have been used to catalyse biotransformation reactions but suffer from the disadvantage that the haem residue is easily oxidised by hydrogen peroxide - one of the substrates. This problem can be overcome by adding the hydrogen peroxide in small aliquots throughout the course of the reaction.

The V-HPOs do not have this problem and are more suitable for use as catalysts in the chemical syntheses we describe here. V-HPOs are also stable in organic solvents and at temperatures up to 70ºC.3 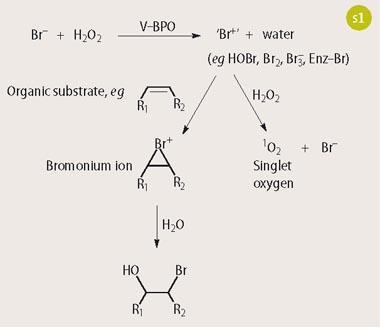 The enzyme we use from C.officinalis is a V-BPO, and bromide is the most electronegative halide it can oxidise. The reaction mechanism for the transformation of organic substrates by V-BPO is summarised in Scheme 1.3,4 A cationic Br+ type intermediate is produced as the reactive species by oxidation of bromide by hydrogen peroxide. This then reacts with a suitable organic secondary substrate, for example by electrophilic addition to a carbon-carbon double bond, to yield a bromonium ion intermediate.

The broad range of the organic substrates modified by this enzyme is thought to be attributed to the deep funnel-shaped active site within the enzyme where the vanadium atom is located.5 The reactive species produced by the enzyme can be either enzyme-trapped, enzyme-bound, or a freely diffusible species, depending on the nature of the secondary substrate.4

The biological function(s) of haloperoxidases are still the subject of debate. Some researchers believe they play a role in the mechanisms by which macroalgae prevent the formation of bacterial biofilms colonising on their outer surfaces.5-7 The extracellular HPOs of brown algae have been suggested to be involved in the synthesis of polyphenol compounds used in cell adhesion,8 and they may play a part in halide uptake from seawater.9 The intracellular haloperoxidases appear to be located in the chloroplasts6 where they probably help to protect against damaging hydrogen peroxide produced as a result of photosynthesis.10 Regardless of these roles, however, the net effect of haloperoxidase-catalysed reactions is the release of significant quantities of volatile organohalogens into the atmosphere, which is the focus of the undergraduate lab-based work.6,11

Although V-BPO from C. officinalis is available commercially, it is easy to prepare and, if time is available, the preparation would provide students with additional useful laboratory experience. They do not have to purify the enzyme but we do require that they remove any enzymes - eg catalase and guaiacol peroxidase - that might compete with V-BPO for substrates such as hydrogen peroxide. The preparation and purification of our enzyme is summarised in Fig 1.3,12,13

Figure 1 - Preparation of vanadium-haloperoxidase from the seaweed Corallina officinalis

We selected several compounds for our undergraduates to synthesise to illustrate the variety of naturally occurring organohalogens, though we deliberately chose some of the less complex molecules. In addition, we wanted the students to work with a group of chemicals that would give them experience of a variety of different methods of monitoring the reactions. Reactions (i)-(vii) represent the molecules chosen and the monitoring methods used.

Students do the syntheses on a 'biochemical scale', ie millimolar scale, which is economical and allows them to try different conditions quickly. Where there is a change in the light absorbance properties of the substrate/product, UV-visible spectrophotometry provides an ideal way of monitoring the reaction. For example, the conversion of indene to bromoindanol (reaction (v)) can easily be monitored by the disappearance of the absorbance at 260 nm, characteristic of indene (Fig 2). 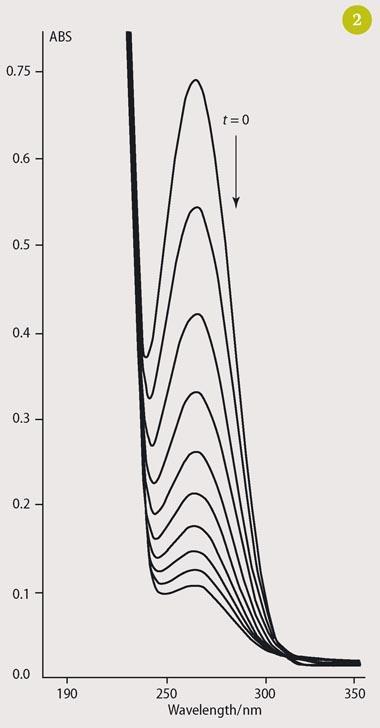 Working on this millimolar scale, students know quickly that the reactions are proceeding and can demonstrate the need for V-BPO to be present to catalyse the reactions. In addition, the reactions can be monitored in situ within a cuvette. This approach also demonstrates that different substrates require varying amounts of enzyme for reactions to proceed at comparable rates which, in turn, reflects the different affinities of the enzyme for different substrates. Reaction rates increase as expected up to about 70ºC, after which enzyme denaturation decreases catalytic efficiency and rates start to fall. Remarkably, however, the enzyme recovers its catalytic activity after incubation at room temperature for several hours. 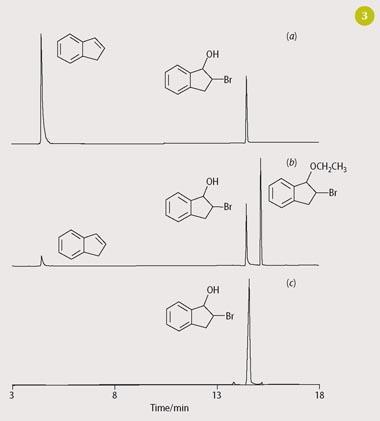 Using a simple liquid-liquid extraction (hexane or dichloromethane) of the reaction mixture after a range of incubation periods (typically 5-120 minutes), analysis of the extracts by GC reveals the gradual depletion of indene and the formation of bromoindanol (Fig 3). Confirmation of bromoindanol can be achieved either by comparing the GC retention time with that obtained for an authentic standard of this chemical or by further analysis by using GC-MS (Fig 4). Indene and bromoindanol are primarily characterised by their molecular ions in their mass spectra, with the presence of a bromine atom being particularly conspicuous for the latter via its characteristic isotopic distribution (79Br: 81Br = 1:1). A discussion of mass spectral fragmentations is also appropriate for chemistry undergraduates. 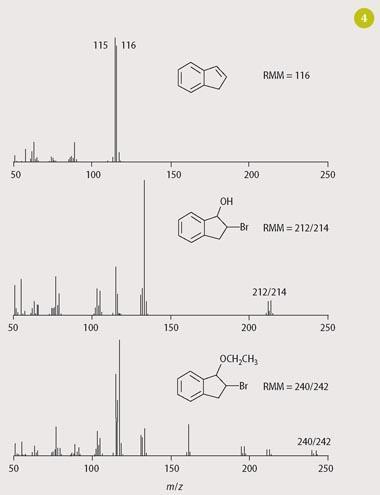 Using V-BPO enzymes, the most commonly formed products from substrates containing alkene groups are the corresponding bromohydrins (eg reactions (i), (iii), (iv) and (v)), though these may react further in some cases. As with chemical halogenation, it is also often possible to get different products by varying the reaction conditions.

Interestingly, the bromination of indene in aqueous ethanol (40 per cent) yields an additional product to the bromohydrin reaction in water alone. Mass spectral analysis of this compound (Fig 4) showed it to be the ethylated derivative of bromohydrin, formed presumably by a competitive reaction between the two solvents for the intermediate bromonium ion. As such, simple changes to reaction conditions can provide good opportunities for students to characterise 'unknowns' and further their understanding of competitive reactions. Future work should elucidate the wide range of effects achievable by such variations in reaction conditions.

When we tried brominating stilbene with V-BPO, bromide and hydrogen peroxide (reaction (ii)), we obtained no reaction despite the ready bromination with HBr/H2O2 or other brominating agents.19 The reaction with HBr/H2O2 is reported to involve a 'Br+' ion intermediate, as does the V-BPO/Br-/H2O2 reaction. Feasibly, it may be that the enzyme-generated intermediate is not sufficiently electrophilic to react with stilbene. This can serve as a reminder to students of the concept of selectivity in organic chemical reactions (see, for example, the electrophilic addition of Br2 to alkenes and aromatic compounds).

Alternatively, stilbene may not be able to find a suitable orientation within the pocket of the enzyme for reaction to take place. Either way, it represents an interesting discussion point for students and we hope that, in the future, by varying the reaction conditions, we will be able to obtain either the bromohydrin or dibromo derivative from stilbene.

Our demonstrations of the potential of enzymes as catalysts in organic chemistry described here are simple, flexible, inexpensive and provide a range of learning opportunities for chemistry students. The variety and complexity of natural organohalogens that our studies represent remain just the tip of a very large iceberg.

Simon Belt is professor of chemistry in the centre for chemical sciences, and Les Jervis and Loretta Jervis have retired from the school of biological sciences at the University of Plymouth, Drake Circus, Plymouth PL4 8AA.

We thank the Higher Education Academy (Physical Sciences Centre) for funding this project via a Development Grant and to Natalie Bristow, a final-year undergraduate chemistry student at the University of Plymouth, for investigating some of the bromination reactions.