In the steps of Markovnikov

The addition reactions of HCl and HBr to propene to give either 2-chloropropane or 2-bromopropane are often given as examples of Markovnikov's Rule, but in his original 1870 paper, Markovnikov used HI and not HBr or HCl. Two teachers and two A-level students try to repeat Markovnikov's experiment.

There are no experimental details in Markovnikov's paper to show that he (or anyone else) had actually reacted HCl/HBr with propene. He does comment though that these hydrogen halides had been used by other workers, for example Reboul who claimed to have reacted HBr with acetylene to give the first vinyl bromide and then 1,1-dibromoethane.2 This lack of experimental detail prompted us to see if we could bring about and analyse the products of the propene/HI reaction by using only the methods available to Markovnikov at that time.

From the start we were faced with two main problems. First, because propene is insoluble in hydroiodic acid it reacts very slowly, and secondly, without modern instrumentation, it is difficult to confirm that the product is 2-iodopropane. Various methods have been used to get round these difficulties, for example by using concentrated ethanoic acid as a common solvent3 or by using a phase transfer catalyst,4 and then identifying the product by using nmr.

It is easy to show that propene reacts with hydroiodic acid if the analysis of the products is done using gas chromatography.

Fill a 100cm3 syringe with propene (see below) and 5cm3 of 57 per cent hydroiodic acid. Seal the syringe, shake and leave for a week at room temperature. After that time, extract the product with 5cm3 of octane, dry and analyse using gas chromatography. When we did this experiment two peaks were visible, corresponding to 2-iodopropane and octane (see Fig 1 (b)). There was no sign of a peak for 1-iodopropane and we concluded that the product must have contained less than 0.1 per cent of this isomer. (Figure 1 (a) shows peaks corresponding to 2-iodopropane (112s) and 1-iodopropane (117s).) 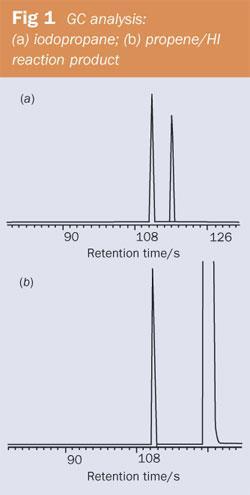 Markovnikov would have had to distinguish between the isomers either by boiling point or by density measurements. We decided to measure the boiling points because the densities of the two isomers are too similar for identification. Since propene was not available from a cylinder, we prepared it in situ. We tried two different methods, ie the dehydrohalogenation of 2-bromopropane and the dehydration of propan-2-ol. The first method gave a good, easily controlled yield of propene but because it requires concentrated ethanolic KOH, a highly corrosive reagent, we don't recommend this method.

We used concentrated phosphoric acid saturated with P2O5 for the dehydration of propan-2-ol.

Slowly add, in small amounts, an excess of P2O5 (ca 40g) to 50cm3 of well-stirred orthophosphoric acid (85 per cent). Place 25cm3 of this mixture in a 100cm3 three-necked flask equipped with a dropping funnel, reflux condenser and a thermometer. Heat the phosphoric acid mixture to 180-200°C on an electric mantle and add propan-2-ol dropwise. (The reflux condenser was used to keep back unchanged alcohol and to retain any ether formed.)

Run off the propene from the top of the condenser via a glass tube fitted to a two-holed bung, into the bottom of a 1dm3 screw top bottle containing 20cm3 of hydriodic acid (57 per cent). Collect a test tube sample of the displaced gas via a second tube in the bung and stop heating when the collected gas burns quietly with a luminous flame. Cap the bottle, shake and leave for 10 weeks in a warm cupboard. We decided to leave the bottle for this length of time because we had already failed to make enough product for the boiling point analysis when the reactants had been left for two weeks. We also mixed equal propene with an excess of hydrogen iodide gas and left this mixture for 10 weeks. There was no sign of any liquid product and we concluded that the simpler method, ie using an excess of 57 per cent HI was preferable.

Place the contents of the bottle in a separating funnel: an oily lower layer should be visible. Wash out the bottle twice with two 5cm3 portions of pentane and shake these washings with the contents in the separating funnel. The oily layer dissolves in the pentane, which can then be separated and placed in a 25cm3 round bottomed flask. Add a few bumping granules and evaporate the bulk of the pentane at room temperature by using a filter pump. Transfer the residue to a 10cm3 flask and, by placing the flask under vacuum in slightly warm water, evaporate nearly all of the rest of the pentane. Place an air reflux condenser on top of the flask and suspend a 110°C thermometer with its bulb just above the liquid. Heat the flask, using an electric paint stripper, in a well ventilated fume cupboard. When we did this the temperature soon rose from 36°C (the boiling point of pentane) to 89°C. The residual liquid, when gently refluxing, boiled between 89°C and 90°C. We recorded the same temperature when the bulb was placed in the boiling liquid, indicating that it was reasonably pure.

On distillation at 90°C, there was no evidence of a higher boiling point residue. The boiling point of 2-iodopropane is given as 89.5°C and that of 1-iodopropane as 102.6°C.5 Our value of 89-90°C suggested that the product was more than 95 per cent 2-iodopropane. The product had a mass of 0.85g, a 12 per cent yield if we assume that the screw-topped bottle was initially filled completely with propene.

According to the literature, Markovnikov stopped work on the addition of hydrogen halides to alkenes because his results were inconsistent when he used hydrogen bromide.6 The reason for these inconsistent results was resolved by the work of Morris Kharasch in 1933.7 He showed that, in addition to the usual ionic mechanism, HBr can add on by a free radical route if initiators such as peroxides are present. The ionic and free radical mechanisms yield different products which is why Markovnikov's later results were inconsistent. It was fortunate that in his original paper he chose to use HI, which does not have the free radical complication. Textbooks rarely point out how difficult it is to make a hydrohalic acid react with an alkene, (particularly ethene, which is very unreactive). This inertness is relevant when answering an A-level question on such addition reactions. A good answer should include suitable reaction conditions, one of which would be to indicate that the reactants ought to be in the same phase, which can be achieved either by dissolving the reactants in a common solvent or by ensuring that they are all gaseous. Credit should not be given for an answer that states that the reactants are placed in contact with each other at room temperature; there are very few alkenes which are reactive enough to make this a practicable method to bring about the reaction.