UK chemists identify main areas for research funding for the next 20-40 years.

In September the Engineering and Physical Sciences Research Council (EPSRC) published its findings on a recent consultation to identify the 'grand challenges' facing the chemical sciences and engineering for the next 20-40 years. But is such a strategy the best way to fund university research? 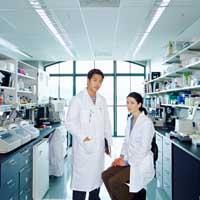 A 'grand challenge' goes beyond what can be achieved by a single research team or in the span of a single research grant. It is what could be achieved in the next 20-40 years if researchers from different research groups, disciplines or institutions were to work together. Such challenges, according to the EPSRC, are defined by their potential to be world research leaders, to provide a step change in current knowledge and for their exploitation of novel and ambitious research methodologies. The Council cites as an example the human genome project, which took many teams of people to identify all 25 000 genes and determine the three billion base pairs in human DNA, and led to other important successes on the way.

With this in mind, in March, the EPSRC, in collaboration with the Chemistry Innovation Knowledge Transfer Network (CIKTN), the Institute of Chemical Engineers (IChemE) and the Royal Society of Chemistry (RSC), invited the chemical sciences and engineering communities to identify their own 'grand challenges' which would underpin a 'community-driven' strategy for research in these areas in the UK. Katie Daniel, senior portfolio manager at EPSRC, told Education in Chemistry, 'We wanted to stimulate the community to drive its own Grand Challenges forward and to think about changing the way they do research and how they relate their research to what else is going on in the UK'.

In total EPSRC received 153 individual responses from 32 university chemistry departments. An advisory group, of nine academics and one industrialist, identified the eight broad 'grand challenge' themes, which were published by EPSRC in a report in September. These were, broadly:

These themes will form the basis of discussions in a workshop on the Grand Challenges later this month among 120 EPSRC-invited representatives from the defined community. The participants will also consider five 'cross-cutting' areas - catalysis, modelling and simulation, measurement and analysis, quantum coherence, and chemical reactivity and predictive theory - identified by the advisory group that could be important to the progress of the Grand Challenges. One or more of these may be put forward as a Grand Challenge after the workshop.

What part the Grand Challenges play in the EPSRC funding mechanism, according to Daniel, will depend on the outcomes of the workshop and the following consultation stages. 'The outputs from the workshop will be fed to our physical sciences and strategic advisory team who will then consider whether it is appropriate for EPSRC to fund specific activities in the Grand Challenges. The themes will also act as "benchmarks" for the second EPSRC International Review of Chemistry in the UK, in spring 2009, which will be led by Professor Michael Klein of the University of Pennsylvania'.

The Grand Challenges programme is being viewed by academics with some caution. Many see it as a culmination of a recent trend at the EPSRC to focus its funding on a series of schemes and 'special calls', and, despite reassurances from EPSRC, a move away from the Council's more traditional 'responsive mode' approach to funding. Daniel explained, 'I don't think we're anticipating any major funding programmes around the Grand Challenges but hoping more for a cultural change in the types of things we see coming through the responsive mode, and we may signpost certain areas'.

Traditionally, 'responsive mode' meant that anyone could send in a proposal, on any subject, for any amount. The proposal was then reviewed by a panel of experts. Tom Welton, head of chemistry at Imperial College, London, told Education in Chemistry, 'The great creativity that science produces springs from scientists being given as much freedom as possible to explore and exploit their ideas. The list of surprise results from unexpected areas that leads to revolutions in science is endless. I see no evidence that these special calls lead to best practice in science, even in the subject area of the particular call. I am very concerned that this approach is not based on evidence of the outputs. We need to know what leads to the greatest quality and number of students and post-docs trained, papers/patents etc for the money spent on these schemes compared to the same from what the responsive mode would give us? My guess is that responsive mode would win'.

However, in the current unstable state of the UK economy alongside the challenges of climate change and energy deficits, others may welcome EPSRC's Grand Challenges as a way of spending public money 'responsibly' and providing solutions to problems that will benefit the UK as a whole. There's an argument that says that now's the time for doing research that is not only interesting but also important.

A view from industry

David Fox, senior director in discovery chemistry at Pfizer, told Education in Chemistry, 'It's a question of addressing issues that are both interesting and important. However, sometimes you don't know what's important, which is where the Grand Challenges come in. These must be carefully constructed though, so that we don't know the answer before we've set the challenge. I think this will be key to success. The more defined the challenges are, the more you constrain research. The Grand Challenges should be seen more as a guide for how chemistry academics can best engage with the key challenges facing the UK so that the research can potentially be applied in a wider context'.

According to Fox, it is up to industry to help shape the landscape of where solutions need to be found, and should be seen as an opportunity for academics to take a leading role in delivering 'collaborative' solutions to these problems. In the case of organic synthesis, for example, the academic chemist would still be investigating fundamental organic chemistry, he said, but as part of a collaborative effort might also be helping the medicinal chemist to solve huge problems, eg understanding metabolic pathways that lead to toxicity or gaining insights into transporter-mediated processes.

Moreover, the skills that PhD students would develop by engaging in collaborative work and developing partnerships with different people are just the skills that industry values, said Fox. 'The Grand Challenges are an opportunity to address a real need in the UK for more collaborative research, as identified five years ago by the first EPSRC International Chemistry Review and since then, it would appear little has changed', he said.

The EPSRC is expected to report on the Grand Challenges, following consultation with the physical sciences strategic advisory team in January 2009.