David Bradley on the strongest, thinnest material known to man

The 2010 Nobel Prize in Physics could have almost been awarded as the chemistry prize as it featured the fabrication and science of the uniquely fascinating carbon allotrope known as graphene. Nevertheless, Russian-born Andre Geim and Konstantin Novoselov, both currently working at the University of Manchester, this year share the physics glory for what the Nobel committee describes as 'groundbreaking experiments regarding the two-dimensional material graphene'. The Prize comes with a cash award of 10 million Swedish Kronor (almost £1 million).

Graphene can be thought of as a single sheet of the more familiar graphite (of pencil lead fame) where each carbon atom is bonded to three others in a flat, two-dimensional array, forming a network of hexagons resembling chicken wire. The sheets are so thin that 3 million piled on top of each other would be no more than one millimetre thick. Despite it being merely one atom thick, graphene is the strongest, thinnest material known. It has many bizarre and unexpected properties, for example even though it is transparent, graphene is so dense that not even helium gas atoms can pass through. Since its rediscovery in the mid-2000s, researchers have started making graphene transistors and other devices that might one day lead to computers that use arrays of molecules instead of silicon chips.

The work by Geim and Novoselov on graphene is equally bizarre and unexpected. Geim explains that the pair discovered how to make graphene in a 'fun Friday afternoon experiment' where they used adhesive tape to peel off the top layer of carbon atoms from a pencil mark on a glass surface and, with repeated folding and peeling of the sticky tape, were able to whittle the deposit down to a layer one single atom thick. Of course, the fine details of this 'cleavage' technique and its implications for science were published in research papers with rather esoteric, yet intriguing, titles such as Electric Field Effect in Atomically Thin Carbon Films1 in the journal Science in October 2004 and Two-dimensional atomic crystals in Proceedings of the National Academy of Sciences2 in 2005. 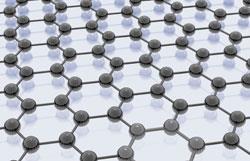 The seemingly simple way in which graphene was made by Geim and Novoselov confirms what is, in hindsight, obvious: that fragments of graphene are formed every time graphite is abraded, such as when a pencil scribbles on a sheet of paper and leaves behind its visible residue. The idea of producing a monoatomic layer of carbon atoms was first posited back in the 1930s although at the time scientists assumed they would be too unstable to be fabricated. It wasn't until the early 1960s that German chemist Hanns-Peter Boehm coined the name graphene by combining the root of graphite and the chemists' suffix for alkenes, and synthesised single graphene sheets.

Given how relatively easy it is to make graphene today, researchers the world over are now working on possible applications in microelectronics, display technology, touch-screens, and quantum computing.

On learning that he was to be awarded the 2010 Physics Prize, Geim remarked, how 'sometimes there are very simple experiments and very simple discoveries to be made using what is at hand'. This is perhaps one simple discovery that might ultimately revolutionise technology in the coming years.

Negishi, Suzuki and Heck were honoured for their pioneering work on palladium catalysis, David Bradley reports