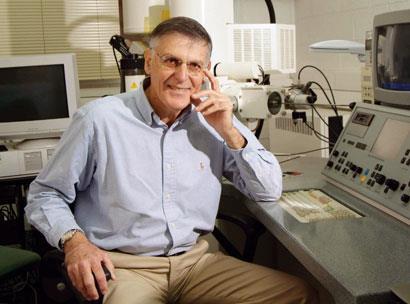 The 2011 Nobel prize for chemistry was awarded to Daniel Shechetman of the Technion - Israel Institute of Technology, Haifa, for the the discovery of quasicrystals

The 2011 Nobel prize for chemistry was awarded to Daniel Shechtman for the shocking discovery of quasicrystals, materials that are crystalline but break the symmetry rules and contain no repeating units.

Until recently, textbooks would tell us that the arrangement of atoms in solids have short-range and long-range order. Chemical bonds between atoms give rise to the short-range order, even in so-called amorphous materials such as glass where local order exists. Crystalline materials have long-range order, recognised since Abbé Haüy in 1784, who explained how repeating units give rise to crystal shapes. Crystallography has shown repeatedly how crystals fit this pattern and how pentagonal symmetry could not exist. Pentagons, unlike triangles, squares and hexagons cannot tessellate, they cannot be laid together to form regular, repeating, 'crystalline' patterns, without gaps that break the symmetry and lead to long-range disorder in the pattern.

By 1982, the textbooks were almost ready for a rewrite. On the morning of 8 April that year, Danny Shechtman, worked at the National Bureau of Standards in Gaithersburg, Maryland, now the National Institute of Standards and Technology. He was using electron microscopy and diffraction to look closely at aluminium alloys. The diffraction patterns he had obtained for these materials were puzzling and seemed to suggest that these materials had tenfold symmetry. In his lab book, alongside Run #1725, he wrote: '10 fold ???'

The diffraction patterns he had obtained ran counter to the known laws of crystallinity. The atoms in his crystals were packed solid, the materials were crystalline, but the patterns within had no repeat. The discovery was like being able to stitch together a football from merely hexagons. Every soccer player knows that you need five-sided pentagons to make the familiar truncated icosahedrons; a structure found in the buckminsterfullerene molecule, [60]fullerene. Shechtman knew his studies were solid, his evidence robust. He had found crystals that broke the symmetry rules. Unfortunately, the textbooks were not quite ready for revision.

People who break the rules are not usually accepted by their community.

Shechtman published his findings in a research paper in 1984 in the renowned, peer-reviewed journal Physical Review Letters, not to scientific acclaim of a new breakthrough in discovery but to derision. The controversial paper ultimately tore apart Shechtman's reputation, he lost his job, lost friends, and lost credibility.

But, Shechtman was convinced that crystals need not be regular, repeating structures. Nature knows nothing of the rules we impose on it. Moreover, there are numerous examples of patterns that can be produced that at first glance look regular but on closer inspection simply do not repeat. Moorish artwork, exemplified by medieval mosaics at the Alhambra Palace in Spain and the Darb-i Imam Shrine in Iran hint at such disorder. Penrose tilings too, discovered in the 1950s by Roger Penrose of the University of Oxford suggest how units with pentagonal symmetry might nevertheless mesh together, not to form regular tessellating patterns, but patterns nevertheless. If nature does not necessarily follow our crystal rules, it does tend to follow fundamental mathematical rules. Shechtman's discovery was eventually accepted as other scientists reproduced his work and produced what eventually became known as 'quasicrystals' in the laboratory, finding numerous natural minerals similar to such materials. Research continues to find yet more quasicrystals with unusual strengths for engineering and other applications and Shechtman's results have gained the ultimate vindication in winning the Nobel prize.