The 2011 Nobel prize for chemistry has gone to Dan Shechtman 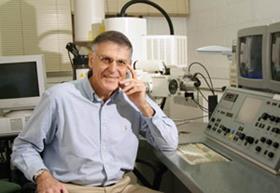 The 2011 Nobel prize for chemistry has gone to Dan Shechtman for the discovery of unusual quasicrystals that break all the rules when it comes to symmetry. The prize shows the rewards that perserverance can deliver after most other crystallographers were convinced Shechtman made a mistake.

'Quasicrystals are a fascinating aspect of chemical and material science' explained David Phillips, President of the Royal Society of Chemistry. 'You can normally explain in simple terms where in a crystal each atom sits - they are very symmetrical. With quasicrystals, that symmetry is broken: there are regular patterns in the structure, but never repeating.

'They're quite beautiful, and have potential applications in protective alloys and coatings. The award of the Nobel prize to Daniel Shechtman is a celebration of fundamental research.'