They sound dangerous, what are they? 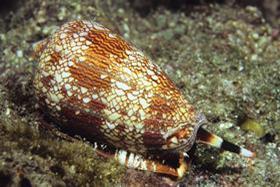 Conotoxins, or conopeptides, are chemicals made by marine snails that live in shallow waters of the Atlantic, Pacific and Indian Oceans. These snails have beautiful shells that make them prime targets for collectors. Snails use conotoxins to paralyse prey, such as other molluscs, worms and fish.

To compensate for their immobility, the cone snails harpoon their prey and inject the venom. The toxin acts on the nervous system of the prey. Each snail uses a complex cocktail of chemicals, maybe 100 different compounds.

Is there more than one kind of conotoxin?

Yes. Each species seems to come up with different types. Most conotoxins are small polypeptides, containing between 10 and 40 amino acids - rather smaller than the 60-70-amino acid neurotoxins that snakes use in their venom. Several kinds are known, such as:

Why are these compounds important?

Conotoxins may be lethal to fish, but they could be potent new medicines. α-Conotoxin Vc1.1, from the mollusc hunter Conus victoriae, is a polypeptide composed of 16 amino acid residues, including glycine, cysteine, serine, aspartic acid, proline, arginine, tyrosine, asparagine, glutamine, histidine and isoleucine. This compound is currently being tested as an analgesic for treating Parkinson's disease and Alzheimer's disease.

ω-Conotoxin MVIIA, from the fish-hunter Conus magus, is a polypeptide comprising 25 amino acid residues. This molecule selectively blocks N-type calcium-ion channels, which in the body are concentrated in neural tissue. Marketed under the name Prialt (it has also been known as Ziconotide and SNX-III), this is a powerful painkiller which shows great promise for treating the severe pain associated with malignant diseases such as cancer and AIDS. The patient wears a pump that injects the drug straight into the fluid surrounding their spinal cord. Prialt is some 1000 times stronger than morphine but, because it targets a different receptor in the body, is free of the addictive properties of morphine.

Prialt received US Food and Drug Administration (FDA) approval in 2004, and has recently been approved for use in the UK.