Is our cash contaminated? 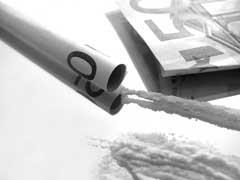 Yes, with illicit drugs. In 2007 a Dublin City University team led by Professor Brett Paull completed a survey of Euro notes in Dublin and found virtually 100 per cent had levels of cocaine (1) ranging from 2-200 nanograms, and similar results have been found using £10 and £20 notes in the London area, and with dollar bills in the US.

How does it get there?

Cocaine users may roll up a note to make a tube to 'snort' cocaine, so that particular note becomes heavily contaminated. When these notes come into contact with other notes, for example in a counting machine at a bank, some of the cocaine is transferred to other notes.

How are the drugs detected? 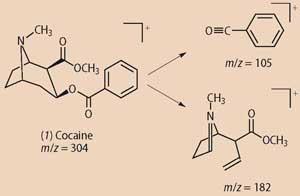 The quickest technique, developed by Gavin Lloyd and colleagues at Bristol University in collaboration with Jim Carter and his colleagues at Mass Spec Analytical of Bristol, uses tandem mass spectrometry. The note is heated up to 285°C for one second, causing the note's surface to release any drug molecules. These are carried on a stream of air into the spectrometer, inside which they are ionised (and in the case of cocaine they get protonated). If the cocaine molecular ion collides with other ions, it can split into smaller fragments. To identify cocaine the spectrometer is programmed to select the peaks with m/z values of 182 and 105, the two main fragments of the molecular ion (see scheme), and measures their intensities. The technique is fast and sensitive, scanning 50 banknotes in ca four minutes.

In May 2009 a Spanish team led by Maria Alda of the Institute for Environmental Assessment and Water Research, Barcelona, reported traces of cocaine, amphetamines and opiates in the atmosphere around Madrid and Barcelona. The team analysed air quality near university sites in each city, collecting samples on quartz microfibre filters. Using methanol and propanone solvents under pressure, they made extracts of the samples which were then analysed by using liquid chromatography coupled with tandem mass spectrometry. Cocaine concentrations in air ranged from 29-850 picograms per cubic metre, peaking at weekends.

Are there other ways to monitor drug abuse?

In December 2008 a team led by Professor David Russell of the University of East Anglia described a way of identifying drug users by the presence of drug metabolites in their fingerprints. The technique relies on the fact that when a surface is touched, molecules in sweat are deposited as a latent fingerprint. Forensic investigators dust magnetic powder onto these fingerprints to develop them. Russell and his colleagues have taken this a step further by using magnetic particles conjugated with antibodies that detect for specific drug metabolites.