Glyphosate (1) is a non-selective, systematic herbicide. This organophosphate compound is the active ingredient in the weedkiller Roundup.

What's so special about this herbicide?

Organophosphate compounds (eg sarin) were first developed during World War II as chemical warfare agents, but later low concentrations of these compounds found applications as pesticides. A lot of organophosphates affect the human nervous system, which is why there has been concern about people working with organophosphate compounds used in sheep dips for example. In particular, they affect the enzyme acetylcholinesterase, which breaks down the neurotransmitter molecule acetylcholine. Inhibition of this enzyme leads to a build up in the levels of acetylcholine in the nervous system, which can disrupt nerve signals to muscles. Apart from being very effective against plants, glyphosate is safer than ordinary organophosphates because it has very low toxicity in mammals, birds and fish. 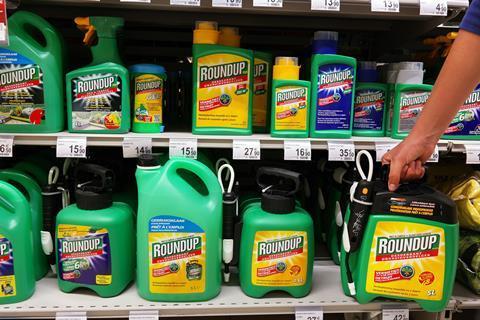 How does glyphosate kill weeds?

The herbicide works by inhibiting the shikimic acid pathway plants use to synthesise the aromatic amino acids phenylalanine, tyrosine and tryptophan, as well as lignin and flavour components. Shikimic acid (3,4,5-trihydroxybenzoic acid) is an intermediate in this vital process for plant survival and growth - 35 per cent of the plant mass (dry weight) is derived from this pathway. This pathway is present in algae, higher plants, bacteria and fungi, but is absent in mammals, fish, birds, reptiles and insects, which explains why glyphosate doesn't affect humans or animals.

How does glyphosate work?

Glyphosate binds to the enzyme EPSPS (5-enolpyruvoylshikimate-3-phosphate synthase). This enzyme catalyses the transfer of an enolpyruvyl moiety from phosphoenol pyruvate to shikimate 3-phosphate, forming 5-enolpyruvoylshikimate-3-phosphate - a building block for the aromatic amino acids. The EPSPS enzyme is composed of two sections, which close up on ligand binding. The glyphosate molecule occupies the binding site normally occupied by phosphoenol pyruvate, thus blocking the transfer step.

Does glyphosate have any other applications?

Scientists are now looking to develop antimicrobial agents that target the EPSPS enzyme, which would be effective against bacterial, parasitical and fungal pathogens. Tests have shown that glyphosate inhibits the growth of the pathogenic malaria-causing parasite Plasmodium falciparum. Folic acid is required by parasites for DNA synthesis. By using a combination of glyphosate and anti-folic acid drugs, researchers have developed a treatment that cures over 50 per cent of a sample of mice infected with the Toxoplasmosis parasite. Tests on humans (or mosquitoes) are the next steps in this research.