Hospital beds with a silver lining? 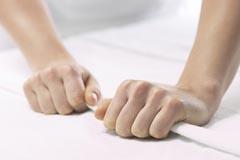 Experiments are being done to see if silver-containing bedclothes and sheets can act against drug-resistant bacteria like vancomycin-resistant Enterococcus (VRE) and methicillin-resistant Staphylococcus aureus (MRSA), not least in cutting down doctor-patient transfer of infections.

How is the silver introduced into the fabrics?

This can be done by incorporating silver threads into the fabric before weaving, or by treating the fibres with a silver-based coating, or by impregnating a polymer mesh with silver, which is wrapped around the fibres during manufacture.

How do the silver compounds work?

As with many other heavy metals, silver, as its cation, kills bacteria, but without the acute toxicity associated with metals such as lead and mercury. Heavy metal ions bind readily to groups containing oxygen, nitrogen and sulfur atoms, as well as negatively charged groups such as phosphates and chlorides. Once absorbed by the bacterial cell silver ions can attack proteins containing these groups, eg the sulfur-containing thiol (-SH) group common in enzymes vital to the survival of bacteria. Silver will also attack fungi and viruses, the latter by inhibiting their proteins and by complexing with viral nucleic acids.

The germicidal and antimicrobial properties of silver and its compounds have been known for thousands of years and put to use in silverware, eg Holy Communion chalices.

Do silver compounds have other medicinal uses?

Silver-coated wound dressings have been used for some years. Recent research suggests that silver-based antimicrobial coatings for wounds may kill MRSA bacteria by interacting with bacterial membranes, as well as forming a barrier to prevent bacteria from entering the wound.

Silver sulfadiazine (1) - a combination of silver ions with a sulfonamide drug - was introduced in 1968 as a treatment for second- and third-degree burns. The drug also stops the growth of an array of bacteria (sulfa drugs have been used to fight bacteria since their discovery in the 1930s). Silver sulfadiazine is also incorporated into dressings in combination with other antiseptics like chlorhexidine (a combination active against MRSA in vitro).