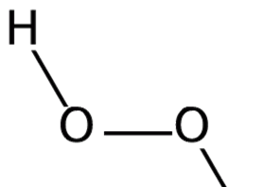 What's this about hydrogen peroxide being used to treat cancer?

Some American doctors have tried injecting patients with hydrogen peroxide as a treatment for cancer, multiple sclerosis and other complaints. Sadly, however, people died after the treatment.

Yes, but in very dilute solutions (3 per cent). Similar solutions of H2O2 are also safe to put on cuts to clean wounds. The American Cancer Society says that there is no evidence to support the view that hydrogen peroxide is a cancer cure, and that the chemical may well be harmful. Some cells may produce hydrogen peroxide under certain circumstances to kill germs. In fact, when H2O2 is produced in human metabolism the body calls on the remarkable enzyme catalase to destroy hydrogen peroxide very quickly. One catalase molecule can destroy over 4 × 107 hydrogen peroxide molecules a second.

So hydrogen peroxide is unstable?

The compound is stable by itself, but readily decomposes in light or in the presence of metal ions (or, indeed, other catalysts). Being a strong oxidising agent, hydrogen peroxide is a useful bleaching agent. In hair treatments, for example, hydrogen peroxide oxidises melanin, the coloured pigment inside the hair, so that the hair becomes colourless. It is the presence of the extra oxygen atom in the hydrogen peroxide molecule that makes it so reactive, decomposing to water and oxygen. The process is exothermic so that, in concentrated solution, a lot of energy is released.

Is that why hydrogen peroxide is used in fuels?

Yes. The World War II German Messerschmitt 163 rocket aircraft used the reaction between methanol, hydrazine and H2O2, acting as an oxidant, to make it the fastest aircraft in the skies over Europe. The plane had only a short endurance, but could reach 500-550 mph. Towards the end of the war, a couple of experimental U-boats used the catalytic decomposition of concentrated (and unstable) hydrogen peroxide to produce the steam to drive turbines that enabled them to reach 20 knots submerged. Peroxide-powered torpedoes were used for years; the Royal Navy gave them up after a serious accident in 1955, but the Russian navy persisted with them. It was a malfunctioning peroxide-powered torpedo that probably led to the Kursk submarine disaster in August 2000, in which the crew of 118 perished.

It can be, in more ways than one. The chemical has been used to make the unstable explosive triacetone triperoxide (TATP), the explosive the 'shoebomber' Richard Reid intended to use to destroy an American Airlines jet in 2001. Security experts suggested that the terrorist organisations implicated in the foiled plot to destroy several airliners in August 2006 were going to manufacture TATP en route. Explosives experts have suggested the explosive was used in the London bombings of 7 July 2005. In May 2006, police were called to a house in Manchester when a student blew the doors off the garage of his parents' home after detonating TATP (he was sent to jail in October 2006 for 14 months).

Best not to handle H2O2 then?

Not for everyone. The bombardier beetle stores hydrogen peroxide. When threatened by other insects (eg ants), the beetle mixes H2O2 with hydroquinones in a reaction chamber lined with catalase and peroxidase catalysts. The resulting scalding mixture of hydrogen peroxide and quinones is expelled through a nozzle on the insect's abdomen, accurately aimed at the attackers.