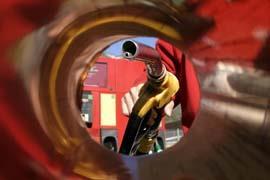 Will we be filling up with lactones in future?

What is a lactone?

They are cyclic esters. The γ- (five-membered ring) and δ-lactones (six-membered ring) are formed by a dehydration reaction involving an acid group (-COOH) with an alcohol group (-OH) in the precursor hydroxy carboxylic acid. Many lactones occur in a wide range of natural substances.

So why are they newsworthy?

Gamma-valerolactone (GVL) (1) has been suggested as a biofuel alternative to ethanol.

Bioethanol, produced by fermenting crops such as wheat, barley and sugar beet, is one answer to the world's energy needs because it relies on renewable sources. Once distilled from the fermenting mixture, bioethanol can be added to petrol.

By 2010, 5 per cent of all motor fuels sold on UK forecourts will be required by law (under the Renewable Transport Fuel Obligation Programme) to come from renewable sources. However, some case studies have suggested that making bioethanol may produce more CO2 than the fuel saves, and others believe that using cereal crops to make fuels will force up the prices of these basic commodities. Biodiesel, made from oil-rich crops such rape and palm oil, has been blamed for deforestation occurring in the Far East.

Where does GVL come in?

István T. Horváth and his co-workers at Eötvös Loránd University in Budapest, Hungary, argue that γ-valerolactone has many characteristics of a sustainable liquid fuel.

This lactone is miscible with water, but easily separated by distillation - much more easily separated than ethanol which forms an azeotropic mixture containing 95.6 per cent ethanol and 4.4 per cent water that cannot be separated further by fractional distillation. GVL is stable under neutral conditions and does not oxidise to peroxides in air. The compound has low melting but high boiling and flash points, making it is easy and safe to store and to move.

Comparative tests on GVL-gasoline mixtures and ethanol-gasoline mixtures showed very similar behaviour, but the lower vapour pressure of GVL leads to better performance. Since GVL does not form an azeotrope mixture with water there could be considerable energy savings in fuel production, which might promote use of GVL.

Gamma-valerolactone is found in some fruits (peaches, strawberries, for example) and is used as a food additive. The current challenge is how to produce sufficient quantities of the chemical from a renewable source.