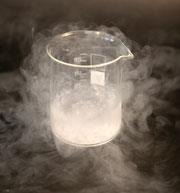 Why is liquid nitrogen in the news?

An 18 year old woman in Lancaster has had her stomach removed after drinking a 'nitro' cocktail that was given a smoky effect using liquid nitrogen. It seems that outside of laboratories liquid nitrogen is proving quite the star turn - from making ice cream in Camden, to being used in cocktails around the country.

How do you make a cocktail with N2(l)?

Basically, everyone seems to want a cocktail that looks like it comes from the set of an Addams Family movie. 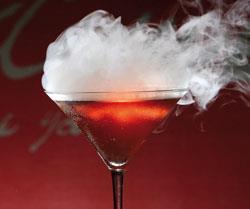 ... but take care when using it for special effects

So what happened in Lancaster?

Well, the bar isn't commenting and its website and Facebook page are unavailable, but the wonders of cached websites suggest that the cocktails the bar serves were of the smoking but liquid variety. That at least removes the risk of super cooled ice causing burns, but I can just imagine after a few drinks you're not going to wait for the 'smoke' to disappear.

Peer pressure, 'having fun', whether it was some supercooled ice in the drink or the liquid nitrogen itself, it sounds like a recipe for disaster and in this instance it was.

How is it handled in a lab?

I recall, as well as having fun freezing things with leftover liquid nitrogen, getting some pretty serious warnings about how to use liquid nitrogen safely - don't touch any of the pipes, use protective gloves when appropriate, never take the lift with it and instead put the container in the lift and send it off, while you take the stairs.

I even saw how items dipped quickly into liquid N2 did not freeze, because they were protected by an insulating layer of gaseous N2 (a phenomenon known as the Leidenfrost effect), but how if left in contact for longer tissue could be frozen and destroyed.

I somehow doubt the risks of liquid nitrogen were spelled out to the poor woman in the same way they were to me as a chemistry student and so, at the age of 18, she has lost her stomach.

Shouldn't it be banned?

To counter some of the more alarmist news reporting that has been published, liquid N2 is not toxic. It's incredibly cold and, if used in a controlled manner, it's safe and can add drama to restaurant dining rooms and labs alike.

But I wouldn't drive drunk, I wouldn't go into the lab drunk and I'd not trust myself with liquid nitrogen when drunk.