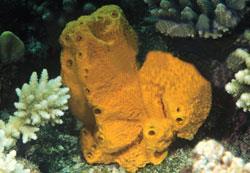 A sponge full of chemicals

Indeed, this molecule (C17H22ClN9O2) was first identified in 1993 from the sponge Stylotella aurantium, collected off the Palau Islands in the Pacific. The molecule contains several amine groups, hence its name. No one is quite sure why the sponge makes this molecule - it may deter fish from feeding, or discourage microbes from living on them.

What is special about it?

Palau'amine is reported to have some antitumour, antibacterial and antifungal activity, and could therefore become a lead molecule for a new drug. However, there are problems. For one it has proved challenging to synthesise for several reasons: the core of the molecule is under considerable strain; it has some reactive groups like amines and pyrrole rings that are readily oxidised; and it has an unusual trans -junction between two five-membered rings. Although the molecule is acid-stable, the free amine decomposes at a pH above 6.5, so it is handled as a salt with trifluoroethanoic acid (1).

What are chemists doing?

Research groups worldwide have been trying to make this molecule for 17 years. On 17 December 2009, Phil Baran and his team at the Scripps Research Institute in California reported their success in Angewandte Chemie. The synthesis involved 25 stages, with an overall yield of 0.015 per cent.

How did they do it?

Several interesting reactions were involved. Baran exploits cascade reactions, which cut down the number of steps overall. He avoids the use of: (a) protecting groups as far as possible (which also cuts down the number of steps); and (b) redox reactions. The researchers used silver(II) picolinate to introduce an -OH group in the correct place, and cyanamide in a reaction to make a 2-amino imidazole ring. This reaction was done in saturated NaCl solution, so that the high [Cl-] would prevent the chlorine that was part of the organic molecule being displaced in a nucleophilic substitution. 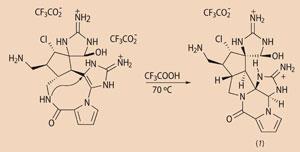 At the end of the synthesis came another key step (see equation). Baran hit upon the idea of creating a 'macro-palau'amine'. This would have a folded shape, bringing a nitrogen atom and a carbon atom from opposite sides of the molecule so close together that they would link up in a 'ring closure', forming two smaller rings.