That's a purple solution isn't it?

Yes, nowadays it's referred to as potassium manganate(VII), KMnO4

What uses does KMnO4 have?

A major use is as a steriliser - it's strong oxidising properties make it an effective disinfectant. Complaints such as athlete's foot and some fungal infections are treated by bathing the affected area in KMnO4 solution. The compound is commercially available as a disinfectant, eg Condy's Fluid. In warm climates, vegetables are washed in a KMnO4 solution to remove bacteria such as E.coli and S. aureus.

Organic chemists use KMnO4 as a strong oxidising agent, and it also finds commercial use in the manufacture of important compounds such as saccharin, ascorbic acid (vitamin C) and benzoic acid. Baeyer's reagent is an alkaline solution of KMnO4 and is used to detect unsaturated organic compounds, but because the solution also reacts with extraneous impurities bromine water is more commonly used. However, the reaction of KMnO4 with alkenes is commercially important in extending the shelf life of fruit, flowers and vegetables. 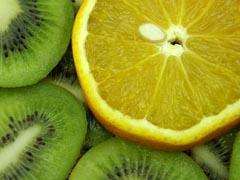 Ripening fruit releases ethene, which in turn causes other fruit to ripen. This effect is at the root of the saying 'one rotten apple spoils a barrel'. This can be a nuisance when such perishable products are shipped or stored so incorporated into the containers are gas scrubbers that use porous material impregnated with potassium manganate(vii) (2-5 per cent, on alumina or zeolite) to remove ethene from the atmosphere.

Usefully the scrubbers indicate when they need to be replaced because the purple colour changes to brown as the KMnO4 is used up.

What else can KMnO4 do?

As a strong oxidising agent it can start a fire. Drip dry glycerol (propane-1,2,3-triol) onto potassium manganate(VII) and after a short time the glycerol starts to burn, with a pink flame.

A similar reaction occurs with ethane-1,2-diol (ethylene glycol), which is used as antifreeze.

What use is that ?

In the 1960s, bushfire experts needed an efficient way of burning back vegetation to manage the build up of fuel well before the dry season and thus reduce the risk of large bush fires starting of their own accord. They developed a programme of 'prescribed burning' in which polythene tubes filled with KMnO4 crystals were injected with ethane-1,2-diol just before they were dropped from aircraft over the target area. These caused fires when they fell upon vegetation.

Today these delayed aerial ignition devices are based on KMnO4-filled ping-pong balls, which are injected with ethane-1,2-diol. The balls start burning in 20-30s.