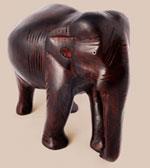 For thousands of years people have valued sandalwood. King Hiram of Tyre supplied it to Solomon when he was building the Temple in Jerusalem. It is a fine-grained, dense, yellow, fragrant wood that keeps its aroma for a long time; it traditionally has applications in perfumes and medicine, as well as being a wood that can be worked and carved. A parasitic tree, the best variety is the Indian Santalum album, especially associated with the area round Mysore, where it is made into statues of Hindu gods and elephants. Most, however, is used in oil and incense factories as the burning of sandalwood is important in both Hindu and Buddhist ceremonies.

What's sandalwood got to do with perfumes?

Sandalwood oil is important in perfumery - its sweet, balsamic and woody smell is used as a base note for perfumes and it also acts as a fixative to prevent volatile molecules escaping. Guerlain's Oriental perfume Samsara (1989) contained 25 per cent sandalwood oil.

What are the important chemicals in sandalwood oil?

The most important compounds in sandalwood oil are the santalols, which together make up around 80 per cent of the oil. β-Santalol occurs as (-)-(1'S, 2'R, 4'R)-(Z)-β-santalol, with its strong woody scent, in contrast to the isomeric  α-santalol, which has a weak woody smell. β-Santalol is also an antiseptic. 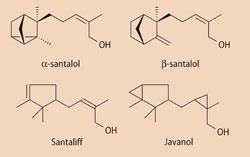 Why is sandalwood in the news now?

Demand for sandalwood has increased greatly, and there is now a flourishing black market in India. Santalum album is an endangered species because of overharvesting.

What can be done about it?

There are three solutions - plantations, chemical synthesis or biosynthesis. Taking the first option, TFS Corporation, an Australian firm, has planted over 1700 hectares of Indian sandalwood (Santalum album) in Western Australian plantations, as an alternative source of supply.

Although β-santalol is hard to prepare, with many stages in the synthesis making its production uneconomic, there are other "sandalwood" molecules derived from campholenic aldehydes that can be made easily from α-pinene, which is obtainable cheaply from coniferous trees. Santaliff® has a milky and creamy sandalwood smell, but replacing the C=C bonds with cyclopropane rings makes a more rigid - and less reactive - molecule with a stronger scent, known as Javanol®.

Biotechnology is now also getting in on the act. The Allylix company of San Diego, California, US, has extracted the genes for the enzymes responsible for santalol synthesis from sandalwood trees and expressed them in yeast as a way of making low-cost santalol, and in an eco-friendly way too.