Scratch and sniff to detect crime

The game is afoot! UK charity Crimestoppers is enlisting the help of the Great British public to sniff out cannabis farms. To aid the public in their undercover work they've been handing out scratch and sniff panels. These give people an idea of what living, growing, cannabis smells like - Crimestoppers describes it as a sickly, sweet smell, as opposed to the more acrid aroma when it's smoked. 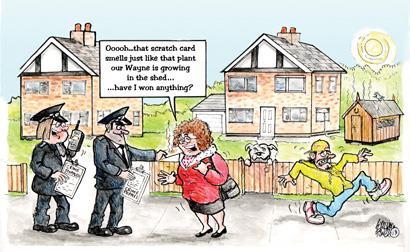 The charity is working with the police to try to tackle the increase in residential farms, where people often grow the plants hydroponically in attics using heat lamps and high intensity lighting. The police claim that cannabis cultivation is fuelling organised crime, while the UK's energy regulator says that the cost of electricity stolen by these farms may be costing the economy as much as £400 million each year.

Lucy Reid, campaign manager at Crimestoppers, explains that the Dutch police ran a similar campaign and as a result there was a 45% rise in cannabis farms sniffed out in Amsterdam. She points out that the scratch and sniff panel doesn't contain any tetrahydrocannabinol (THC) - the psychoactive compound in cannabis.

To try to find out more, I spoke with JanCees Neef at the Edge Factory in the Netherlands, whose company produces the scratch and sniff cannabis panels. Dutch police deliver cannabis plants to them and that they quickly process them to extract an oil from the plants. This cannabis oil is then microencapsulated and printed onto cards - this technology can preserve the smell for a couple of years.

To capture a smell

There are many ways of microencapsulating compounds and most have been developed by the cosmetics industry. Scratch and sniff panels often use polymers like polyoxymethylene urea. The oil and polymer are mixed together at high speed to produce droplets of oil 15-20 λm in size, suspended in the polymer solution. A catalyst is then added to crosslink the polymers, sealing the oil inside the microcapsules. The microencapsulated oil droplets are washed to remove leftover polymer and oil, and then processed to form a slurry for printing. The printed microcapsules burst when scratched, releasing whatever smelly compound the manufacturer desires.

As it's a company secret, Neef couldn't tell us which of the volatiles produced the distinctive fresh cannabis smell. However, cannabis' smell is the product of more than 100 terpenoids, including eucalyptol, linalool and pinene. What's also interesting is Reid's insistence that the scratch and sniff panels don't contain any THC, but obviously still contain enough of the smelly terpenoids to provide a rough approximation of the odour of growing cannabis.